THREE JOURNALISTS DETAINED DURING DISPERAL OF PICKET CONDUCTED BY “DALGA” 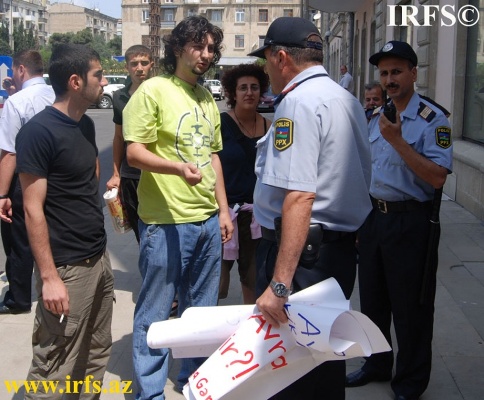 Today (4 July) at noon "Dalga" Youth Movement was trying to conduct a picket in front of OSCE Baku Office when police interfered and prevented it from taking place.

Three journalists were subjected to pressure when the action was dispersed.The youth, who wanted to attract international attention to human rights violations, especially to restriction of the press, and to call on international organizations to react adequately to these realities were met by police in front of the OSCE Baku office. Police detained the Chairperson of "Dalga" Youth Movement Vafa Jafarova along with several other action participants and then took them to the Sabail District Police Department #39.

Police also detained the Institute for Reporters' Freedom and Safety (IRFS) employees Mehman Huseynov and Elmira Osmanova, and "Radio Liberty and Free Europe" employee Durna Safarli. The police ignored their journalist cards and used physical force against IRFS employee Mehman Huseynov. Although M. Huseynov explained to police that they were fulfilling their professional duty there, his arms were twisted and he was forced on to police car.

Four "Dalga" members were freed after having been kept in the department for three hours, while the other three were taken to Sabail District Court. They were released after being warned in the Court.
Photos:http://www.irfs.az/component/option,com_datsogallery/Itemid,30/func,viewcategory/catid,72/
Previous Post

NO MOTIONS OF A. KHALIL’S LAWYER FULFILLED IN HEARING WHICH KHALIL WAS BROUGHT TO BY POLICE

GOVERNMENT OFFICIAL CLAIMS JOURNALISTS IN AZERBAIJAN NOT IMPRISONED FOR THEIR PROFESSIONALISM