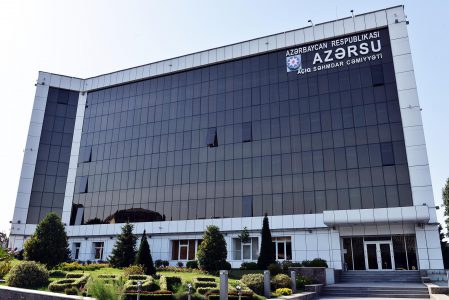 At the hearing, Azersu OJSC’s written response to TIA’s inquiry, dated 30 August 2016, regarding installation of water meters was read out.

The response pertained to the 6th and 7th questions on the inquiry, which had not been addressed earlier. The respondent’s reply to the question “At what prices were meters (mechanical and smart) purchased before 29 March 2016” was “The price of meters bought until 29 March 2016 has not changed.”

However, the defendant’s representative failed to come up with a reasonable answer to Mehman Aliyev’s question “How can previous and current prices not change?” Aliyev pointed out that the respondent was dodging the question.

In response to the 7th question on the inquiry, i.e. “How much does it cost to install one meter and what is the estimated cost of works,” the list of materials used for installation of meters were presented. However, the list lacked prices and cost estimate. Mehman Aliyev did not consider this answer acceptable, either. He asked the court to demand that the defendant give full and detailed answers to the questions raised in the information request.

At the end, the court issued a decision which denied the information request with regard to the 6th and 7th questions, dropped the case on the remaining five questions, and declined to render a special ruling against Azersu OJSC or to impose a fine on it.

Mehman Aliyev said they were unsatisfied with the court’s decision and would appeal it.

Recall that, the proceedings on getting responses from defendant Azersu OJSC to Turan Information Agency’s inquiry had been being delayed for five months, although the Law on Freedom of Information requires the respondent to reply within 7 working days.

Turan Information Agency has found out that Azersu OJSC purchases meters at a higher price at the expense of the funds allocated under the President’s decree of 29 March 2016. The Agency believes that the meter prices and installation costs have been exaggerated by 5 to 19 times.