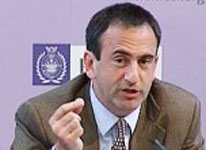 According to a press release disseminated by the U.S. Embassy, during a press briefing held yesterday, 11 June, in the U.S. Embassy for U.S. Assistant Secretary of State Philip Gordon, who is currently visiting Azerbaijan, the issue of Azerbaijan’s imprisoned journalists came up:
Question:  Mr. Gordon, we have serious problems with democracy and human rights.  We have jailed journalists.  What is your estimation of the situation?  What is the message of the U.S. administration for Azerbaijani government on this issue?
Assistant Secretary Gordon:  I will certainly, while here, be discussing issues of democracy and human rights.  These issues are always important to the United States.  They’re important to the Obama administration.  We believe that when countries are more open and free they benefit, and it’s easier for them to be partners of the United States and the West.  We want Azerbaijan to be a close partner of the United States and the West.
Previous Post