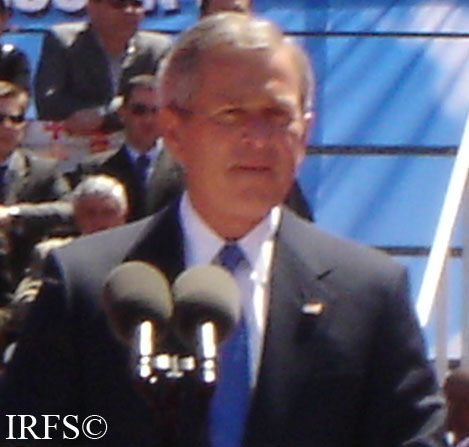 Yesterday, U.S. President George Bush released a statement in honor of World Press Freedom Day.
In the statement Bush mentioned various countries where journalist face persecution and are imprisoned. He said, “In 2007, for the ninth consecutive year, China remained the world's top jailer of journalists, followed by Cuba, Eritrea, Iran, and Azerbaijan.”

Then Bush said, “America stands with those who struggle for their liberty, including those in the press who continue their work in spite of risks. During Fiscal Year 2007, the United States provided $78 million in approximately 40 countries to promote media freedom and freedom of information. As President, I have met with many journalists and editors who are struggling against forces that seek to suppress media freedom. We salute these courageous individuals, and we recognize the importance of the right to a free press in spreading freedom around the world.”

Azerbaijan’s Ministry of Foreign Affairs Spokesperson Khazar Ibrahim has released a statement in response to this. According to APA, Ibrahim said that as Azerbaijan and the USA are strategic partners and have bilateral relations, Azerbaijan wishes that the USA would not include incomplete information in such statements.