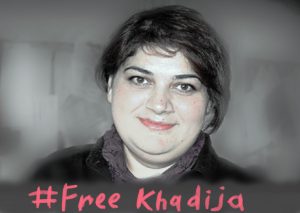 Investigative reporter Khadija Ismayilova
has been released from prison in Azerbaijan.

Khadija, who turns 40 on Friday, had been sentenced to seven-and-a-half years in prison on trumped-up financial charges in September 2015, having been detained since December 2014. The remainder of her sentence was commuted to a three-year conditional sentence. She will be subject to a travel ban and other restrictions.

Ismayilova had been jailed since December 2014 on a range of politically motivated charges – initially inciting someone to attempt suicide, and later the charges of which she was eventually convicted: illegal entrepreneurship, tax evasion, and abuse of office. The real reason she was targeted, however, was her investigative reporting exposing corruption among Azerbaijan’s ruling elite.

Eastern Europe, Caucasus and Central Asia (ECCA) International Media Support Team Leader Gulnara Akhundova said today:
“We are beyond relieved that Khadija Ismayilova has finally been released, but emphasise that she should never have spent a single day in jail. We call for all restrictions on her to be immediately dropped and for her conviction to be overturned”.

“We are delighted that Khadija is finally free, after spending 537 days unjustly jailed. On the occasion of her release, we echo Khadija’s call that we should not focus only on her case, but call for the releases of all political prisoners and concrete steps to address the rampant corruption and human rights abuses in Azerbaijan that Khadija has sacrificed so much to expose”.

The Sport for Rights campaign has organised a global action to mark Ismayilova’s 40th birthday on Friday, 27th May, in 40 cities around the world. Gatherings will still go forward, and participants will celebrate Ismayilova’s release, call for her full acquittal, and call for the release of the country’s dozens of remaining political prisoners.