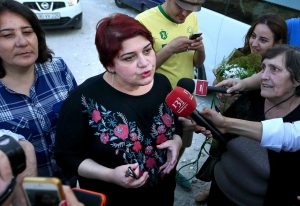 The release of investigative journalist Khadija Ismayilova, imprisoned for exercising her fundamental right to freedom of expression, is no substitute for an effective national justice system, the Institute for Reporters’ Freedom and Safety (IRFS) said today. While IRFS celebrates Khadija Ismayilova’s release, the journalists, bloggers and activists who remain behind bars cannot be forgotten.

“Khadija Ismayilova was thrown into jail after a deeply flawed and politically motivated trial which followed several years of harassment, including a vicious blackmail campaign. While the Azerbaijani Supreme Court has ruled to release Khadija, her conviction has not been overturned. Nor has the Court provided any remedy for the injustice she has suffered,” said IRFS Director Emin Huseynov.

Khadija Ismayilova, who exposed widespread corruption among of the country’s first family, was arrested in December 2014 and sentenced to seven-and-a-half years in jail in September 2015.

She was released on Wednesday following the Azerbaijan’s Supreme Court decision to replace her jail sentence with a three-and-a-half-year suspended term.

“The release of Khadija is a cause for celebration but it is marred by the ongoing harassment of independent media and ongoing detention of dozens of independent Azerbaijani dissenters,” says IRFS Director Emin Huseynov. “The Azerbaijani authorities must release all journalists and political prisoners detained for exercising their right to free expression, and undertake substantial reforms to guarantee human rights in the country. The “revolving door” practice when it comes to political prisoners must stop.”

After 537 days of wrongful imprisonment, Khadija Ismayilova was released but not acquitted. The Supreme Court dropped the charges under Articles 179.3.2 (misappropriation [of money], in a large amount) and 308.2 (abuse of authority) of Criminal Code against Khadija Ismayilova. However, the Court sentenced her to 3.5 years in jail and a 2-year ban from holding certain positions, pursuant to convictions under Articles 192.2.2 (illegal entrepreneurship) and 213.1 (tax evasion) of Criminal Code. Khadija Ismayilova was released on parole, with a probation period of five years. Under the terms of her parole, she will need to check in with Binagadi District Police Department every month.

IRFS believes this is an attempt by the ruling regime to advertise Azerbaijan’s independent judiciary to the international community. IRFS believes that by ordering Ismayilova’s release by commuting her sentence, the Supreme Court merely carried out high-level political instructions in order to help the regime save face before domestic and international audiences.

The fact that the authorities have chosen not to acquit the journalist shows that Ismayilova remains at risk, given the threat of another arrest based on the slightest breach of her parole terms, or indeed a new series of false accusations. Moreover, to date no one has been punished for the smear campaign waged against Khadija, when the intelligence services of Azerbaijan posted an illegally filmed video of the journalist’s private life online. She has faced continuing vilification by the authorities since March 2012.

“The authorities have tried to silence Ismayilova using virtually every imaginable method of pressure against her, including a massive campaign of intimidation and abuse, threats against her relatives and friends, and finally her illegal arrest – and still they have failed to silence her,” Huseynov comments.

“Ismayilova’s release is not a solution to the ongoing media freedom crisis, with independent media outlets such as Meydan TV facing increasing harassment; prevailing impunity for attacks against journalists; and legislation that effectively prevents independent journalists and NGOs from working. The releases of political prisoners cannot, in this context, be considered as the hallmark of major changes*, he adds.

These releases are nothing more than an attempt by the regime to increase its legitimacy before the international community and, most importantly, gain economic and political dividends against the background of the economic crisis (following the decline in global oil and gas prices). As long as the authorities fail to implement large-scale legislative reforms to allow the functioning of all civil society institutions (independent media, NGOs, political parties, religious groups and trade unions), official assurances of reforms must be regarded as empty, self-serving promises. The international community must continue to put pressure on the ruling regime of Azerbaijan and urge them to comply with the obligations it has undertaken before the UN, the Council of Europe and the OSCE, believes IRFS.

IRFS urges the Azerbaijani authorities to drop all the charges and acquit journalist Khadija Ismayilova; to find and punish the masterminds and perpetrators of the murders of journalists Elmar Huseynov, Alim Kazimli, Novruzali Mammadov, Rafig Tagi and Rasim Aliyev; to release all remaining prisoners of conscience – in particular Ilgar Mammadov, whose release has been ordered by the European Court of Human Rights; to allow Radio Liberty’s Azerbaijani Bureau to re-open its office in Baku and carry out terrestrial broadcasting; to stop harassment against Meydan TV; to discontinue the fabricated criminal cases against NGOs and independent media; to lift the illegal travel bans imposed on journalists and human rights defenders; to grant the representatives of international media and NGOs access to Azerbaijan; to cease wrongfully arresting and torturing political prisoners; and to fully comply with all the norms of the Azerbaijani Constitution and the country’s human rights international commitments.

In the event that official Baku refuses to implement real reform in the sphere of human rights and democratization, IRFS calls on international institutions to apply all possible sanction mechanisms against the ruling elite, in particular to: restrict their free movement in Western countries; freeze foreign assets directly and indirectly related to the ruling elite; and limit the issuance of international loans that would strengthen the ruling regime.