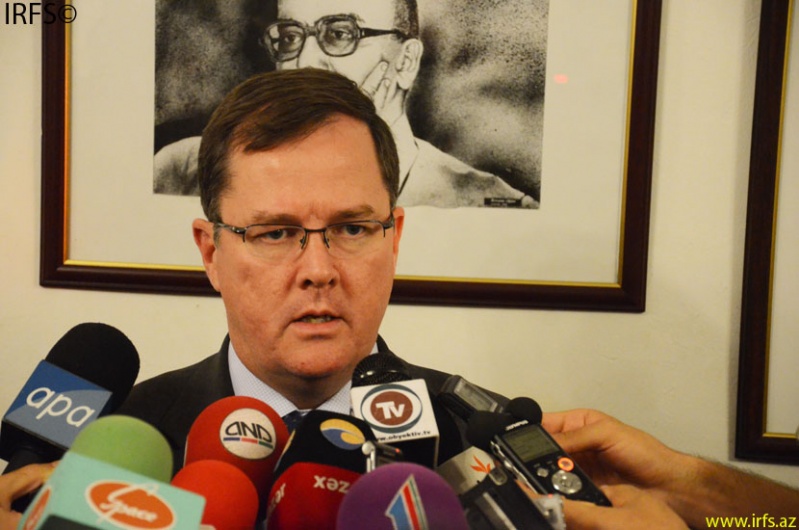 US Deputy Assistant to Secretary of State Thomas Melia met with a group of media and NGO leaders today.
After the meeting, Melia held a briefing for the journalists. Seeing the great number of journalists and TV channels in the briefing, Melia said in joke: “Thanks to everyone. I am not a member of Eurovision winners El and Niki music group – I say it for the high attention I see”. Melia added that he would meet with El and Niki pair if they are in Baku. Later he briefed on the goals of his visit to Baku.
“My aim at paying a 2-day visit is to demonstrate state level support of US President and Secretary of State. There is a broad cooperation between US and Azerbaijan. It includes cooperation in energy, economy sphere as well. Of course, I hope that our cooperation will enhance even more. As I noted in my meetings, our top-level cooperation is only possible with the democratic courties and the governments protecting the rights of their citizens. Therefore we call on our Azerbaijani partners to be more open in both human rights sphere and political sphere,” Melia said. He added that he has met with political party leaders, NGO and media leaders, as well as visited the grave of murdered editor-in-chief of Monitor Magazine Elmar Huseynov.
“ We visited today journalist Elmar Husyenov’s grave, who was murdered 6 years ago. The investigation has yielded no result yet. We hope that there will be progress in this case,” he noted.
Melia also said that he has already receiev reports about the attack against american journalist Amanda Ericksson and British rights defender Celia Davies and that he will study this issue.
Previous Post

HEARING ON YOUTH ACTIVIST’S APPEAL STARTS WITHOUT HIS PRESENCE