UZEYIR JAFAROV CONCERNED ABOUT HIS SAFETY AND SAFETY OF HIS FAMILY 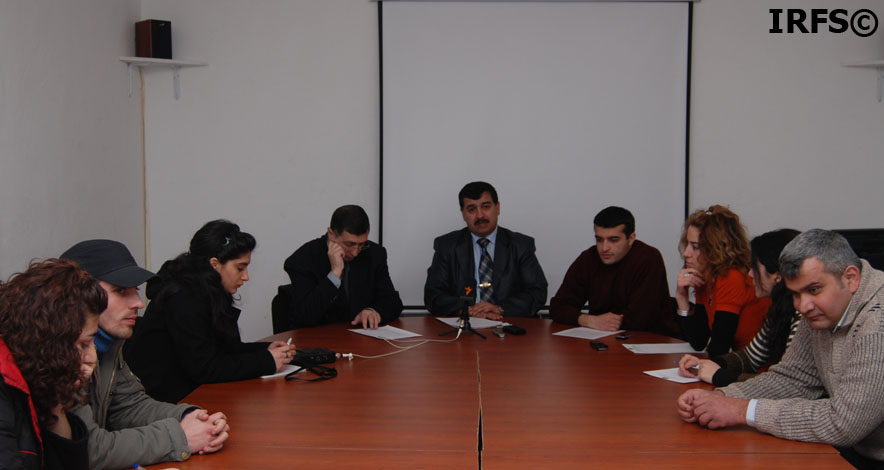 "Although I have taken all cautionary measures I worry about my family," "Gundelik Azerbaijan" editor Uzeyir Jafarov said today during a press conference today in the press center of the Institute for Reporters' Freedom and Safety.
"I appealed to ‘Azercell’ mobile phone company about the threatening phone calls I received on 28-29 January. They told me to appeal to the police department in the district where I live. After I did so, investigator Muslum Huseynov called me to the police department. There they presented a letter dated 18 February and signed by ‘Azercell’ Company Director Halim Atesh. It was noted in the letter that according to Azerbaijan’s Constitution, Procedural Criminal Code and other legislation actions, ‘Azercell’ is not able to help me as it has to maintain the confidentiality of phone conversations of citizens. Thus ‘Azercell’ Company refused to help me without showing any reason, and police considered their work to be completed. I am getting ready to sue ‘Azercell.’ I was pretty sure that this case won’t be considered, because the same thing happened on 20 April in 2007. The people who attempted to kill me still have not been found." The journalist emphasized that he won't appeal anywhere regarding this and said, "I haven't noticed the ‘Press Council’ yet.  The Press Council never helps out journalists in difficult times. Unfortunately the Press Council has turned into one of the departments of the Presidential Administration."
Then U. Jafarov recalled the anniversary of the murder of “Monitor" magazine editor-in-chief Elmar Huseynov on 2 March, and noted, "Although a couple of years have passed since his murder, the murderers' of thos journalist haven't been found yet. However the president promised Huseynov's father Sabir Huseynov that his murderers would be found before 40 days passed after the murder. We all know well who are behind this murder.  Nowadays people who talk about freedom of speech are done away with. I am worried that I am not going to receive hidden calls and no one will attempt to kill me, but I will be silenced with a single bullet. I am already able to see this threat and I am really concerned about my family and myself."
The head of Center for Democratic and Civil Control of the Armed Forces Alakbar Mammadov also participated in today’s press conference. He called on all journalists to unite and said, "We must unite and protect our colleagues who say the right thing. Taking into consideration the reality in Azerbaijan, we see that the government always tries to get rid of journalists who tell the truth. I believe we have to give U. Jafarov the support he needs."