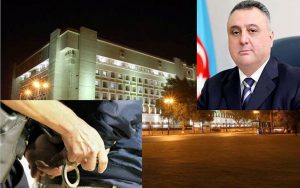 At the hearing, the court examined the witnesses on the episode of Akif Chovdarov being accused of illegally seizing vast lands in Kurdamir region. On this episode of the criminal case in which former executive power head of Kurdamir region Fakhraddin Malikov has also been involved [as a witness], the indictment reads that the general (Chovdarov) decided to engage in agricultural business in Kurdamir region. To this end, he set up RAF-2006 LLC in his son Ruslan Chovdarov’s name in January 2006. After that, land lease agreements were signed with Kurdamir Region Executive Power. Thus, 100 hectares of land in Arshali village of the region, 100 hectares in Gurdbayramli village and 69 hectares in Mollakand village were leased to the company effectively headed by Chovdarov for 99 years. Deputy department head of the Apparatus of the Executive Power Ashraf Shukurov threatened the villagers, who lived in the villages mentioned above and together owned the 269 hectares of land plots, by saying ‘this company belongs to an MNS general. Your properties are bought by him. I advise you to keep silent. Otherwise, you may get arrested on any pretext’. Thus, the land plots were purchased ‘for peanuts’ and seized.

In his statement to investigators, former executive power head Fakhraddin Malikov, who served in this capacity from 2004 to 2012, said he had been unaware of everything. “I knew that land plots were allotted to RAF-2006 LLC, but do not remember the details,” he noted in his statement.

At today’s hearing, Ashraf Rzayev, former deputy head of Kurdamir Region Executive Power on agrarian issues, gave testimony. He confirmed his investigation report and said the executive power head had called him and instructed to do paperwork about the land. “I went to him. He said there was land that needed to be documented. Thus, we documented it,” Rzayev said.

Matlab Rzayev, a former municipality head in Kurdamir region, who currently works as a teacher, took the witness stand next. He also confirmed his investigation statement. He noted that the land belonged to them. “The land was ours. Executive Power employees Ashraf and Gulbala came and told us that the land had to be handed over. At first, we did not agree. Then, the Executive Power employees resorted to intimidation. We were forced to give up the land,” the witness stressed.

Both witnesses said they had not seen Chovdarov.

After the break, Baktel LLC owner Zaur Ibrahimov testified as a victim and confirmed his investigation statement. He recounted how he had been called to the administrative building of MNS. “At that time, I met with Akif Chovdarov there. He demanded USD 550,000 from me. I paid him USD 525,000 in instalments,” Ibrahimov said.

Lawyer S. Rasulov told journalists that due to the inconsistency between the victim’s testimony and his investigation statement, the latter was read out.

Chovdarov denied getting money from Ibrahimov and said Ibrahimov was telling a lie. “It is true that I received Zaur Ibrahimov in the administrative building of MNS. At that time, he owed money to someone. I had a conversation with him in that regard,” Chovdarov said.

The proceedings will continue on 8 February.

While in office, Akif Chovdarov’s name was repeatedly mentioned in connection with pressures against journalists. In February 2008, Azadliq newspaper reporter Agil Khalil was attacked by Chief of MNS General Directorate, Colonel Akif Chovdarov and Directorate employee Daghbayi Allahverdiyev while filming the felling of trees in olive gardens in Baku. The journalist was beaten up and sustained injuries to his face, hand, chest and head and a broken finger. The attack was filmed by random passers-by and uploaded on the internet. After that, the journalist was persecuted by Chovdarov, repeatedly threatened and illegally prevented from leaving the country. Ultimately, the reporter managed to escape the country.