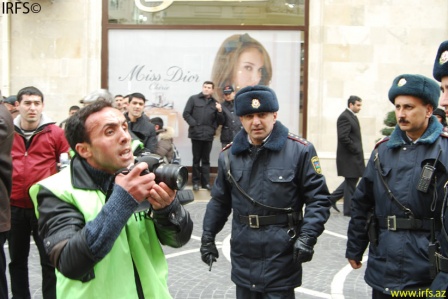 Yesterday, April 2nd, Turan Information Agency photographer Etimad Budagov and RFE/RL reporter Nushaba Fatullayeva faced violence while filming the demolition of apartments at 20 Shamsi Badalbayli street, Baku, Budagov himself reported to IRFS.
According to him, a conflict broke out between the residents and persons implementing the demolition work. Budagov and Fatullayeva were attacked by the head of the secretariat of the city Zulfali Ismayilov and a group of 20 people around him.

“We were attacked by the persons implementing demolition work while we were performing our professional work. My camera was broken. I am going to complain to relevant bodies,” said Budagov.