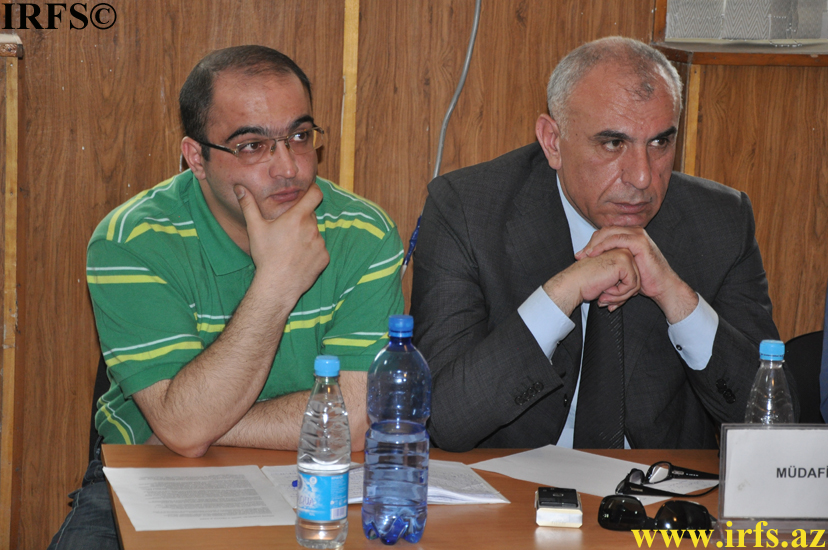 Today, 19 May, in the Garadag District Court, under the chairmanship of Judge Ismayil Khalilov, a hearing was held on the criminal case opened against the Editor-in-chief of Gundelik Azerbaijan and Realniy Azerbaijan Newspapers, Eynulla Fatullayev.
Eynulla Fatullayev filed motions to make audio and video recordings, to secure the participation of independent expert Huseyn Huseynov in the hearing, and to add to the criminal case the investigation he conducted into the death of Rena Nasibova, who conducted the investigation into the crimes committed by Haji Mammadov. The Judge completely fulfilled the motion requesting the addition of his investigation about Rena Nasibova to the criminal case.
I.Khalilov, who allowed the journalists to record during the hearing, said that there is no need to video record the entire process. The judge added that the motion regarding Huseyn Huseynov`s participation in the hearing will be considered.
Prisoners Faig Guliyev and Gabil Agayev, on whom a search was conducted on the same day with Eynulla Fatullayev; and the defendant’s witness Anar Namazov were interrogated in the hearing. Faig Guliyev said that he was not surprised by the fact that drugs were found on E.Fatullayev because a lot of different incidents that happen in prison #12 every day.
Gabil Agayev said that he was not in the same room when the search was conducted on E.Fatullayev and he did not witness the discovery of a narcotic substance on him.
Anar Namazov said that he did not feel that E.Fatullayev was under the effect of narcotics. He noted that although E.Fatullayev waited for the decision of the European Court of Human Rights at that period, he was doubtful about his release.
The next hearing on this case was scheduled for 26 May, at 11:00 a.m.
The European Court of Human Rights issued a decision regarding the case of imprisoned Editor-in-chief of Gundelik Azerbaijan and Realniy Azerbaijan Newspapers Eynulla Fatullayev. The decision states that the journalist should be released immediately and the Azerbaijani government should pay 27,822 EUR to Fatullayev in compensation.
Eynulla Fatullayev was arrested in the court hall on 20 April 2007 under the decision adopted by the Yasamal District Court on the lawsuit of Refugee/IDP Rights Defense Committee Chairperson Tatyana Chaladze.
After his arrest, a criminal case was opened against Eynulla Fatullayev in the National Security Ministry Chief Investigative Office regarding an article published in Realniy Azerbaijan newspaper, which according to the Ministry of Foreign Affairs, caused foreign citizens and representatives of international organs safety concerns. He was convicted under articles 214.1 (threatening terror), 283.2.2 (incitement of ethnic/national, social or religious hatred abusing authority) of the Criminal Code and was sentenced to pre-trial detention. Eynulla Fatullayev was then convicted under 213.2.2 (tax evasion).
Eynulla Fatullayev was sentenced to 8.5 years of imprisonment on 30 October 2007 under the decision adopted by the Grave Crimes Court and was fined in the amount of 242 thousand 522 AZN.
On 29 December, 0.223 grams heroin was found on Fatullayev. Eynulla Fatullayev and his lawyer assess this incident as an operation set-up to prevent the decision of the European Court of Human Rights (ECHR) regarding the journalist in the near future. A criminal case was opened against Fatullayev in the Garadag District Investigative Department under article 234.1 of the Criminal Code (Illegal purchase or storage without a purpose of selling of narcotics or psychotropic substances in an amount exceeding necessary limit for personal consumption) and he was transferred to the Baku Investigative Prison #2 on 2 January. The investigation into the case was concluded and it is being considered in the Garadag District Court.
Realniy Azerbaijan has been published as weekly newspaper, and Gundelik Azerbaijan was published as a daily newspaper since 2005. Eynulla Fatullayev established the newspapers and was the editor-in-chief of both publications. The newspapers ceased their activity after the arrest of the editor-in-chief in 2007.

Dams are not able to block kur river