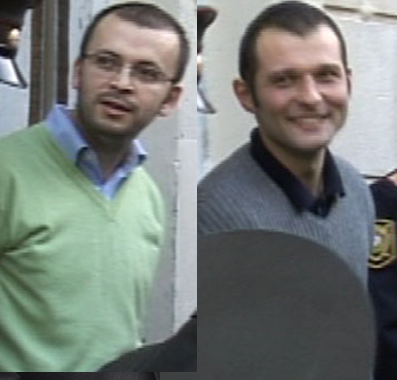 Today, 1 October, in the Sabail District Court, under the chairmanship of Judge Araz Huseynov, a hearing was held on the criminal case opened under article 221.2.1(hooliganism)  and 127 (inflicting intentional minor bodily harm) against young bloggers Emin Abdullayev (Millli) and Adnan Hajizade.
Bloggers’ lawyers Isakhan Ashurov and Elton Guliyev filed several motions at the beginning of the hearing. The lawyers said that too many medical terms were used in the court examination results, and they filed a motion to invite an expert to the court to explain them. This appeal was fulfilled. Then lawyers said that a statement was distributed on Day.az website on behalf of Babek Huseynov and Vusal Mammadov, and photos, which should be known to the investigation only (http://day.az/news/society/165410.html) were placed on the website. Therefore the lawyers claimed that there’s a possibility that these photos and information were placed on the website through the participation of the investigation. They asked the court to investigate this issue. Babek Huseynov and Vusal Mammadov stated in their witness accounts that they did not know such a website named day.az. The judge said that he will investigate this problem.

The employees of the Sabail District Police Department #39 and 9, who were on duty when the incident happened (8 July 2009), and defendants’ witnesses gave accounts during the hearing. The employees of the Police Department #39 said that they did not see Emin Milli and Adnan Hajizade on that day. However, the police employees confirmed that the place in the photos is the front part of the Police Department #39. The damage suffered by Adnan and Emin and help they received from their friends are reflected in the pictures. Although the state plaintiff objected to using these pictures as the evidence, the lawyers stated that those pictures were taken by Adnan’s mobile phone and the date, and the model of the telephone is shown under the pictures. The lawyers said that they are ready to receive an expert opinion about the photos. After the pictures were given to the judge, he said that he will consider this issue.

In their accounts, defendants’ witnesses stated that after Adnan Hajizade entered the restaurant (Adnan was the last to come to the restaurant) Babek Huseynov and Vusal Mammadov came to there. A little while later V.Mammadov came up to the bloggers’ table and asked Emin Milli, “What are you saying?” Although Emin Milli told him that he did not understand him, V.Hasanov repeated his question decisively and hit his head to both of the bloggers. According to the witnesses, Babek Huseynov kicked the table and prevented the people who wanted to separate Vusal from the bloggers and threatened them.

The next hearing on this case is now scheduled to take place on 7 October at 3:00 p.m.