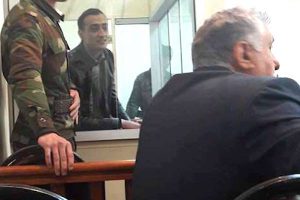 Today, Baku Grave Crimes Court held a hearing on the criminal case of Fuad Ahmadli, a member of Azerbaijan Popular Front Party (APFP). The hearing was presided over by Judge Fikrat Garibov.
Several witnesses testified at the proceeding. According to the testimony of Ahmadli’s friend and party colleague Vusal Kazimov, his fiancée’s cell phone number received a call from a number they did not know, the caller presented himself as Samir Khalilov and said he had dialled their number mistakenly. “I did not believe him and asked Fuad to check that person’s text messages. Fuad said it was impossible. He just said the subscriber’s name and surname. It turned out that it was the same person. After that, I did not make such a request anymore,” the witness said. “Why did you ask nobody but Fuad,” the prosecutor asked. “Fuad is my only friend who works for NAR,” the witness answered.
Sabuhi Imanov, who also provided a witness testimony at the hearing, said he had known Fuad before. “They were calling and joking with me from a number I did not know. I asked Fuad to find out who was the owner of that number. Fuad told me his name. The caller appeared to be my relative whom Fuad also knew,” the witness said.
Ahmadli, in his turn, said the person who had sent a text message to Sabuhi Imanov was their common acquaintance and he had his number in his phonebook. “At that time, I was not at work. I looked it up in my phonebook, and told him,” Ahmadli noted.
Testifying at the hearing as a witness, Elvin Gurbanov said Fuad Ahmadli was his wife’s colleague. “I had a relationship with a woman by name Aynur Aliyeva. She was supposed to call me, but she did not. When I called her, she said she had a zero balance. I asked Fuad to check Aynur’s account balance. He checked and told me that the account had a zero balance. We had bought Aynur’s number together, and she was aware that I knew her personal information. She did not suffer any emotional stress when I learned her account balance,” the witness said.
Fuad Ahmadli’s former colleague Shahin Afandiyev said operators did not possess any confidential information, were not senior officers, and their function was limited to answering calls from subscribers. Answering lawyer Asabali Mustafayev’s questions, the witness said the operators had no special equipment and could not determine the subscriber’s location or listen to a phone conversation between two people.
Later in the hearing, the judge said victim Aynur Aliyeva had applied to the court with a letter. She asked the court to continue the proceedings without her participation as she was in Turkey, and noted that she did not have any complaint or claim.
The judge read out Aynur Aliyeva’s statement provided at that phase of the investigation. Aliyeva had told the investigator that she did not know Fuad Ahmadli, found out about the provision of her personal information to her acquaintance Elvin Gurbanov when being summoned to the investigative agency, and suffered emotional stress. She had asked the investigative agency to recognise her as a moral-damage sufferer.
Next, the judge announced that victims Samir Khalilov and Mahammad Guliyev had also applied to the court with letters, noting that they had no complaints and asking for the trial to be held without their participation.
Lawyer Asabali Mustafayev requested that Aynur Aliyeva’s statement be removed from the list of evidence. He also asked for Samir Khalilov’s victim status to be cancelled. The lawyer referred to the indictment bill as stating that Khalilov had suffered moral damages, and argued that moral damages could only be assessed by the person who had suffered them.
The lawyer further noted that victim Mahammad Guliyev had been perjuring and asked the court to assess this fact.
The court left the motions unexamined.
The proceedings will continue on 6 June.
Background: Fuad Ahmadli was detained on 18 August 2016. According to a joint statement of the State Security Service and the Prosecutor General’s Office, Fuad Ahmadli had transmitted subscribers’ personal data to third parties during the period of his employment in Azerfon LLC.
It was noted that books and CDs containing cleric Fetullah Gulen’s speeches were found during a search in Fuad Ahmadli’s apartment. Fuad Ahmadli is charged under Articles 302 (violation of the legislation on operational-search activity) and 308 (abuse of official powers) of the Criminal Code.
Previous Post

Journalist to Remain in Jail