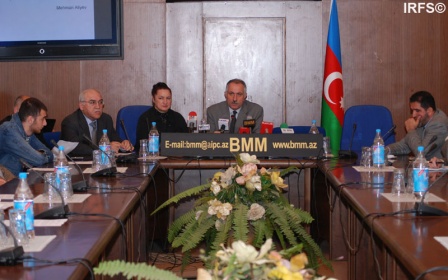 Today (2 May) a roundtable organized by the Committee to Protect Speech Freedom and the journalism community was conducted in honor of World Press Freedom Day.
The document “Media and Society in the Prism of 2008” was presented during the event. The Director of “Turan” Information Agency Mehman Aliyev said that the document was prepared at the order of the Institute for Peace and Democracy as part of a prognosis project.

“The prognoses proved themselves in 2007. 2007 was difficult for all of us, we suffered losses, more than 10 journalists were arrested, pressure against journalists increased, more than a 1000 higher court hearing on cases related to journalists took place, and the economic situation of the newspapers deteriorated. The motive behind this is to destroy free media,” said Aliyev.

According to Aliyev, there’s no basis for the development of freedom of speech in the country; the government influences public opinion and attempts to ensure one-sided information. Aliyev said this is the violation of constitutional rights of Azerbaijani citizens.

“2008 is the year of a presidential election and we, press representatives, should know that the situation will be more difficult and should be ready for this,” emphasized Aliyev and added that the major incidents have been happening in the media sector since the beginning of this year.

“I can’t congratulate journalists for tomorrow because of today’s situation of the media, the Azerbaijani media,” said Arzu Abdullayeva, Chairperson of the Committee to Protect Freedom of Speech.

“Lots of oil revenue flow into the country and will be appropriated; that is why the Azerbaijani government tries to turn Azerbaijan into a basement. That is to say, the opposition must be broken and the media should be silenced,” said political scientist Zardusht Alizaden in a harsh statement, adding that the government takes these steps to keep itself in power.

The Head of Musavat Party Isa Gambar noted that the extraordinary situation in the press has been in existence since Ilham Aliyev came to power, and fear and indifference have been on the rise. “To limit speech freedom is to limit human conscience. To paralyze the media is to paralyze society,” said Gambar. He added that pressure and attacks against the media are an indicator that the government will lose its throne.