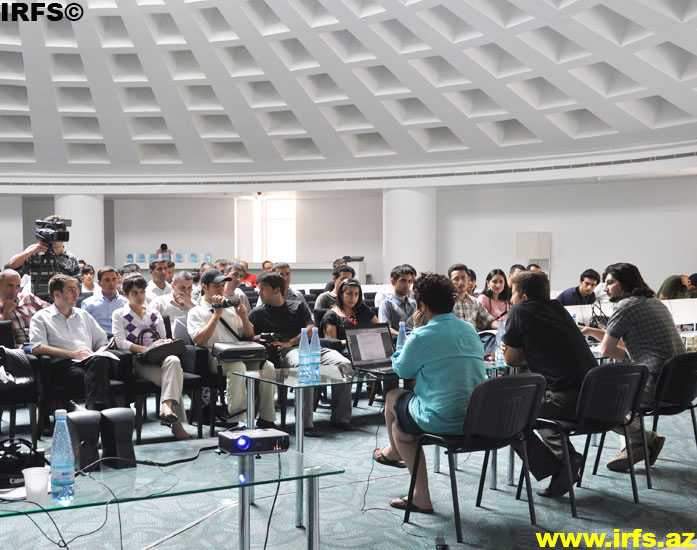 Today, 25 July, the Youth Right Defense Committee (YRDC) conducted a forum in connection with the unfounded arrest of “Alumni Network” Youth Organization Coordinator, ANTV Online TV Leader Emin Milli and one of “OL” Youth Organization Coordinators, well-known videoblogger Adnan Hajizade.
YRDC representative Ramin Hajili spoke during the forum and said that both of the detained young bloggers are supporters of integration to Europe, and therefore they are young educated men to fight for human values via civil means voluntarily. “This movement created after the arrest of Emin Milli and Adnan Hajizade, who do not belong to any political party, proved that this kind of provocation does not scare the youth. In fact the youth is determined to demonstrate strength using civil methods.”
Then YRDC co-ordinator, independent journalist Erkin Gadirli talked about young bloggers’ arrest and said that all nuances show that this case is spurious.
“I want to make those people saying ‘do not politicize this case’ aware that the arrest of these two young people, who are subjected to provocation due to their different opinions and their material placed on the web, is politically motivated.”
It was noted during the forum that a signature gathering campaign is being held in connection with the arrest. A letter containing more than 200 signatures has already been sent to the president of the country. The letter calls on the president to defend everyone’s right.

Then the forum participants expressed their opinions about the release of Emin and Adnan and publicizing this issue.

At the end of the event YRDC representatives Erkin Gadirli and Turgut Ganbar answered the questions from forum participants.
On 8 July, at approximately 8:00 p.m., Emin Milli and Adnan Hajizade were sitting at a table in “Lebonese” (Livan) restaurant along with several other young adults, when two people that looked like sportsmen came up to them, and attacked them causing physical injuries. Although they appealed to police as victims, police detained Adnan and Emin as suspected persons for 48 hours and freed the attackers. On 10 July, Sabail District Court Judge Rauf Ahmadov issued a decision under article 221.2.1 (hooliganism) of the Criminal Code to sentence Emin Milli and Adnan Hajizade to two months pre-trial detention. On July 20 the Appellate Court upheld the decision of the lower court. Both Emin Milli and Adnan Hajizade are being held in the Investigative Prison of Baku.