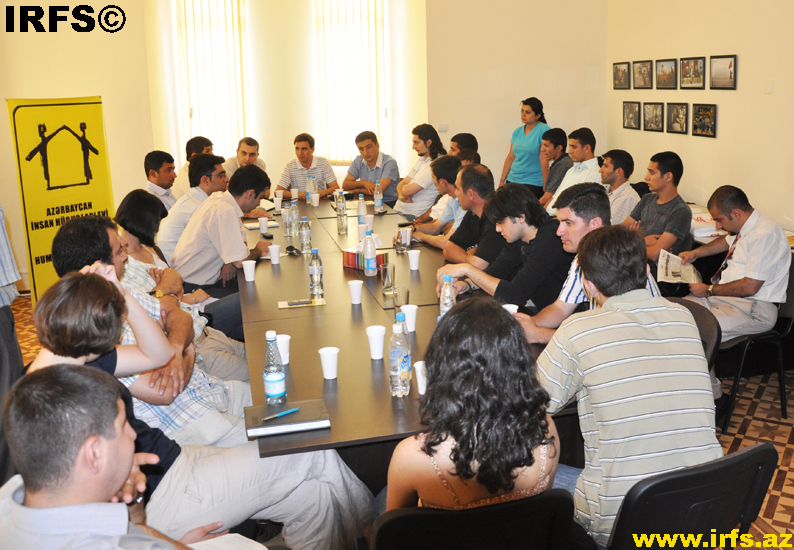 Today, 14 July, in the press center of Human Rights House, a press conference was held in connection with the arrest of “Alumni Network” Youth Organization Coordinator, ANTV Online TV Leader Emin Milli and one of “OL” Youth Organization’s coordinators, well-known video-blogger Adnan Hajizade.
Azerbaijan Popular Front Party (APFP) Youth Committee Chairperson Abulfaz Gurbanli opened the event and said that by subjecting people to physical pressure and harassment due to their individual opinions and political views, Azerbaijan’s government is trying to stifle democratic processes. Gurbanli called on youth organizations to unite.
Column writer Shavalad Chobanoglu said the arrest of these two young adults is repression, and emphasized that NGOs should demonstrate active role regarding this issue.

Then “Election Monitoring and Democracy Education Center” Chairman Anar Mammadli expressed objection to information released by the Internal Affairs Ministry and the Chief Prosecutor’s Office where it is noted that the incident occurred in cultural (life) ground. Mammadli suggested that leaflets be distributed to better inform the public.

Defense Movement for Youth in Azerbaijan Member Ramin Hajili said that different rumors are talked about the arrest of E.Milli and A.Hajizade, and stated that in an article published in today’s edition of “Yeni Musavat” newspaper it is noted that E.Milli and A.Hajizade wanted to initiate a revolution and prepare plans of coup d'etat using financial support from the West and especially from the US. Emphasizing that “Yeni Musavat” newspaper is defending the position of the government, Ramin Hajili said that he regrets that the newspaper took this provocative step. Then he added that they will appeal to “Yeni Musavat” newspaper to publish a refutation. “If a refutation is not published, we are planning to take other measures,” said Hajili.

Independent lawyer E.Gadirli said an appeal will be filed against the decision of the Sabail District Court. If the Appellate Court does not adopt a fair decision, they will appeal to the European Court of human rights, emphasized Gadirli.

On 8 July, at approximately 8:00 p.m., “Alumni Network” Youth Organization Coordinator, ANTV Online TV Leader Emin Milli and one of “OL” Youth Organization’s coordinators, well-known video-blogger Adnan Hajizade were sitting at a table in “Lebonese” (Livan) restaurant along with several other young adults, when two people that looked like sportsmen came up to them, and attacked them causing physical injuries. Although they appealed to police as victims, police detained Adnan and Emin as suspected persons for 48 hours and freed the attackers. On 10 July, Sabail District Court Judge Rauf Ahmadov issued a decision under article 221.2.1 (hooliganism) of the Criminal Code to sentence Emin Milli and Adnan Hajizade to two months pre-trial detention. Both Emin Milli and Adnan Hajizade are being held in the Investigative Prison of Baku.