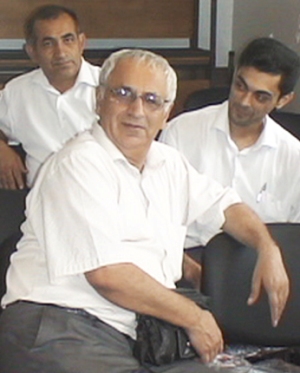 “Jenub Khabarlari” Newspaper Editor-in-chief Zahir Amanov told the Institute for Reporters’ Freedom and Safety (IRFS) that his wife, who was working as the director of the kindergarten in Masalli region Erkivan village, was dismissed from her work because of his journalism activity.
He noted that this stemmed from his articles “There will be starvation in Masalli” and “Mr.Astan, don’t lose your head” (Masalli region Education Department Chief Astan Ibishov), which were about food that was sold to the kindergarten at high prices. Z.Amanov said that Masalli Region Executive Administration Head Gazanfer Agayev and his deputy Nasir Mukhtarli are behind his wife’s dismissal and he was repeatedly commanded to put an end to his critical articles. “I was told numerous times to stop critical articles, or they would dismiss my wife.”

A.Amanov said that the kindergarten was inspected right after his wife sent the expensive food back that was brought to the kindergarten on 10 April, and then they dismissed her after allegedly finding technical shortcomings in the documents. He also added that they will appeal to court regarding this on 11 May.

Masalli Region Education Department Director Astan Ibishov told IRFS that the dismissal of his spouse from her work was related to her inadequacy in her work, not to Zahir Amanov`s work. He pointed out that according to the decision of the Education Department’s Closed Council, Z.Amanov`s spouse was transferred from the position of director to kindergarten teacher.

“Janub Khabarlari” Newspaper has been published since 2004 with the support of NED and is published three times a month.