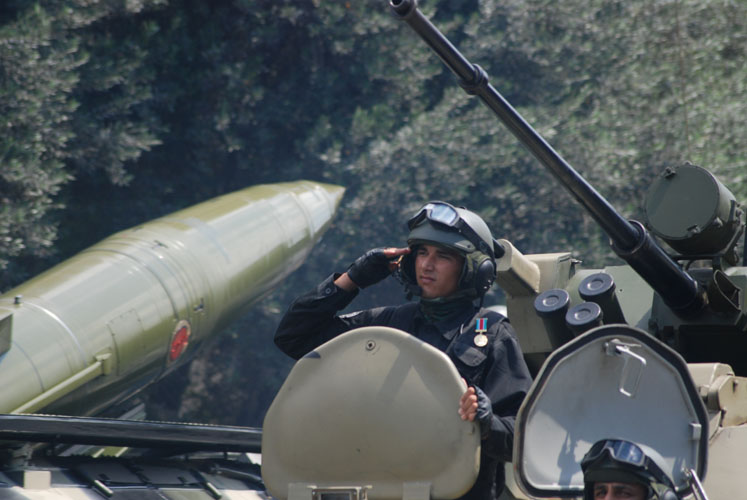 A parade dedicated to the 90th year anniversary of the creation of Azerbaijani Army was conducted in “Azadlig” Square yesterday (26 June).
The parade was previously planned to start in “Azadlig” square, then pass through “Neftchiler” prospect and proceed to “Azneft” circle followed by military fight vehicles and infantry of various army units, however marching soldiers never left the square and most of the military vehicles turned around by Carpet Museum or even earlier, never actually reaching hundreds of spectator. Although  AZTV advertised that the parade would be broadcast live, it was actually broadcast will a delay of about of about 40 minutes.

Besides AZTV, no TV channel, including Public TV, was allowed to film the parade, and this no mass media representatives, other than AZTV employees, were let into “Azadlig” square. The employees of the Institute for Reporters’ Freedom and Safety, who were monitoring the streets and squares, noted these incidents.

According to IRFS employees, regular citizens, who were lined up on the both sides of “Neftchiler” prospect, were not able to watch the parade, because it never reached them. Police didn’t let citizens enter onto “Azadlig” prospect, and calmed them down saying that the march will proceed to “Neftchiler” prospect. However, only a few fight vehicles passed through the prospect. Citizens, who anxiously waited for a real parade till 2 p.m., as well journalists, were able to find out later that the parade was conducted only in the “Azadlig” Square for officials only and was already over.

Photos from the parade can be viewed here .