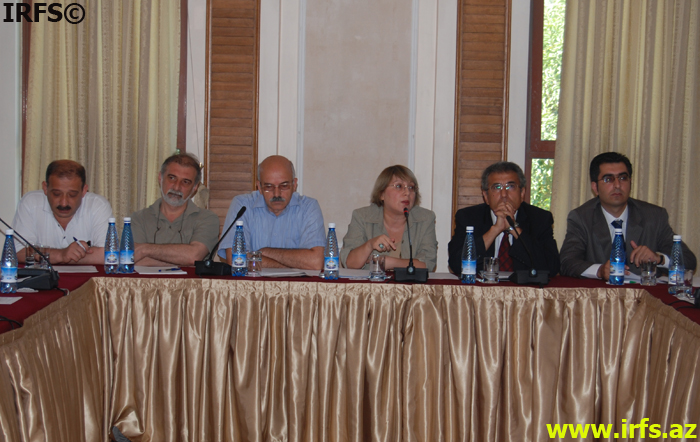 Today (27 June) a forum on the topic “Pre-election Democratic Freedoms in Azerbaijan” was conducted by the Institute for Peace and Democracy.
NGO representatives, leaders of political parties, national deputies, and representatives from the diplomatic corps and international organizations participated in the forum. The chairman of the Institute for Peace and Democracy Leyla Yunus made an opening statement and expressed regret that government representatives were not participating in the event although they were invited.

Then lecturers talked about the pre-election situation regarding the justice system freedom of assembly and the right to vote.  Election Monitoring Center (EMC) Chairman Anar Mammadli evaluated the changes made to Election Code about banning propaganda on AZTV as a reactionary change. The chairman of the Legal Enlightenment Society Intigam Aliyev stated that there’s no independent court system in Azerbaijan, and journalists and citizens have no chance to win cases on speech freedom.

The second part of the event was dedicated to speech and press freedom. “Zerkalo” newspaper political analyst Rauf Mirgadirov and Media Rights Institute (MRI) representative Khalid Agaliyev spoke during the second period of the forum. They said that 4 (four) journalists are still in prison, the “Law on Defamation” wasn’t adopted, journalists are beaten and they are subjected to other kinds of pressure, the ones committing crimes against the journalists have impunity, officials file numerous lawsuits against the journalists and the newspapers are fined because of these lawsuits, mass media are held economically dependent, problems persist in the area of obtaining information, no information ombudsman has been appointed and so on. All these are indicators show that the situation will be complicated during the pre-election period of the presidential elections which will be held in October.

“Bizim Yol” Editor-in-chief Baheddin Haziyev, who was severely beaten in connection with his journalistic activity, Uzeyir Jafarov, the Editor-in-chief of “Gundalik Azerbaijan” which was shut down, “Azadlig” newspaper correspondent Agil Khalil who was beaten at the beginning of this year and then was stabbed, and “Azadlig” newspaper director Azer Ahmadov stated in their speeches that the situation in the area of speech and press freedom is not heartwarming and emphasized that no one is ever punished for the crimes committed. Jafarov noted that now police and authorities claim that “the journalists injure themselves” after the journalists are beaten, and he called this a “new trend.” He said that the same thing happened when he was beaten in 2007 and when the Institute for Reporters’ Freedom and Safety Chairman Emin Huseynov was beaten two weeks ago.

In both cases police claimed that the journalists injured themselves.

Photos from the event can be viewed here .

ONE MORE JOURNALIST COULD BE ARRESTED