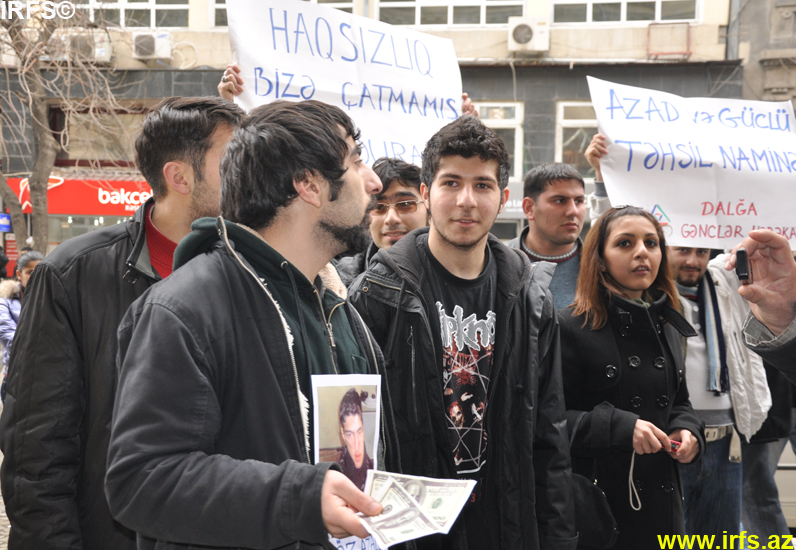 Today, 19 February, a group of “Dalga” youth organization members held a peaceful action demanding that student-journalist Elmin Bedelov’s rights be restored.
Slogans such as “Stop injustice against Elmin Bedelov,” “Let’s end injustice before it catches up with us,” and “For the sake of independent and powerful education” were voiced in the action, which was organized in front of the main and second buildings of the Azerbaijan State Oil Academy between 3.00 p.m. and 4:00 p.m. The participants in the action tried to meet with the Academy’s leadership to express their objection and demands; but the guards of the university and police did not let them in stating that the time for meeting is from 2.00 p.m. till 3.30 p.m. The action began at 3.00 p.m.
Elmin Bedelov was dismissed from the State Oil Academy on 19 January 2010. On 12 November 2009 Elmin Badalov published an article on pia.az website (“Reportage from Azerbaijan State Oil Academy) regarding bribe cases and financial frauds in the Azerbaijan State Oil Academy. The student-journalist claims that pressure used against him and his failures are related to his article.

JOURNALIST CONDUCTS PRESS CONFERENCE REGARDING PHYSICAL PRESSURE HE WAS SUBJECTED TO