JOURNALIST CONDUCTS PRESS CONFERENCE REGARDING PHYSICAL PRESSURE HE WAS SUBJECTED TO 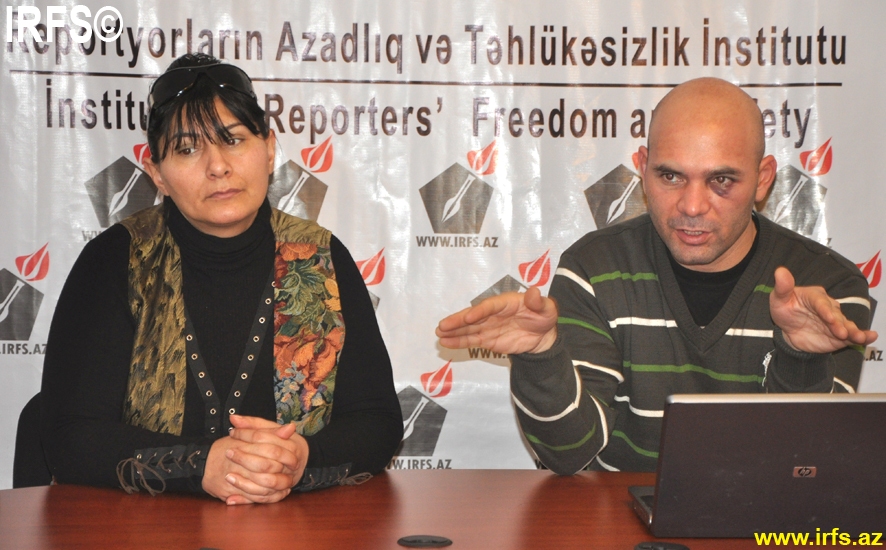 Today, 19 February, in the press center of the Institute for Reporters Freedom and Safety, SalamNews agency correspondent Zulfugar Kheyirkhabar conducted a press conference regarding the physical pressure he was subjected to.
Zulfugar Kheyirkhabar said that on 18 February, at noon, he wanted to prepare information regarding the explosion in the Karvan teahouse in front of the Economic University when Zaur Gafarov, who introduced himself as the owner of the café, insulted him and prevented him from implementing his work. Then, the employees of the Ministry of Emergency Situations wanted to distance him from the area, said Z.Kheyirkhabar, who added that someone named Aziz hit him.  The journalist noted that he was injured as a result.
Z. Kheyirkhabar emphasized that police employees detained the same individuals at his insistence and took them to the police department #9 and there he faced rude treatment by an investigator named Ibrahim, and was subjected to insults in police department #9.
“I said that I was injured and wrote an appeal regarding physical pressure that I was subjected to. The Internal Affairs Ministry called the police department after the leadership of the SalamNews agency communicated with the Internal Affairs Ministry Press Service. Following this, they treated me normally,” said Z. Kheyirkhabar, who noted that he had undergone a medical examination.
SalamNews agency director Gulnaz Gambarli said that she called the Press Council regarding this incident, but her calls were left unanswered. “After this, I gave information to the Internal Affairs Ministry regarding this issue,” said G.Gambarova. “The department employees began to investigate this issue after the Internal Affairs Ministry got involved”.
Gambarova noted that IRFS employees conducted an investigation into the incident and addressed an appeal to the Media Rights Institute for legal support. Media Rights Institute representative Khalid Agaliyev said that his organization will provide legal assistance.
“Tomorrow an appeal regarding the launch of a criminal case into the beating of the journalist and the investigator’s ill-treatment will be presented to the Internal Affairs Ministry,” said K. Agaliyev, who added that all legal steps will be taken to punish guilty persons.
Russian language agency SalamNews (salamnews.org) has been operating since November.