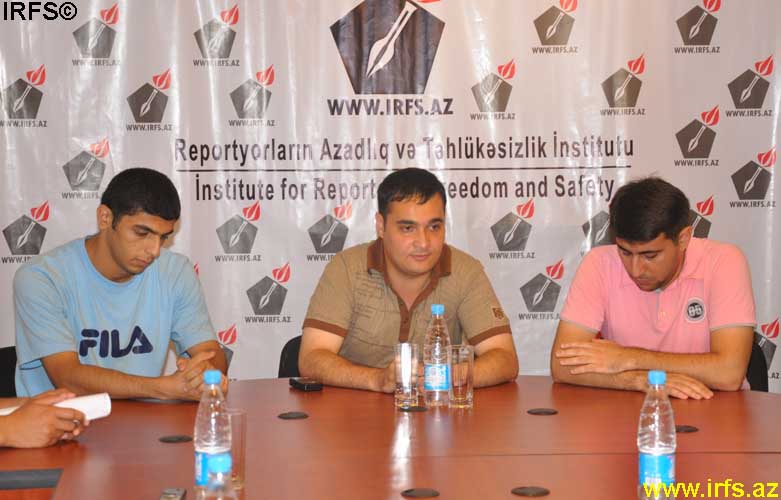 Today, 7 August, in the press center of the Institute for Reporters Freedom and Safety, Musavat Party Youth Organization conducted a roundtable in connection with the opening of a criminal case against Agasif Shakiroglu, the decision to sentence him to pre-trial detention and his release three days later.
A.Shakiroglu was directly sent to military center.
Musavat Youth Organization Deputy Chief Ahad Mammadli said that the criminal case against Agasif Shakiroglu is politically motivated and he is prosecuted due to his socio-political activity.
Shakiroglu’s parents Shakir Ibrahimov and Sevda Ibrahimova said that their son did not evade from military call, and the criminal case against him is unsubstantiated.
“I am proud that my son is in the military service now. However, we would like to see Agasif go to military service normally, not via noisy court trials,” said parents emphasizing that A.Shakiroglu appealed to military commissariat several times, but was told that he would be called when he was ‘needed’.”
Musavat Party Assembly member Sevinj Huseynova, Azerbaijan Popular Front Party (APFP) Youth Organization Chairperson Abulfaz Gurbanlı, member of Youth Right Defense Committee (YRDC) Ramin Hajili and other young adults said that human rights were strictly violated, and condemned cruel fight against opposition youth.
In the Narimanov District Prosecutor’s Office a criminal case was opened against Agasif Shakiroglu under article 321.1 of the Criminal Code (evasion from military call to avoid military service without evidence). On 6 August the Appellate Court annulled the pre-trial decision against Shakiroglu adopted on 3 August in the Narimanov District Court. He was released and sent to military service directly from prison.
Photo: http://www.irfs.az/component/option,com_datsogallery/Itemid,30/func,viewcategory/catid,301/lang,az/
Video: http://www.irfs.az/content/blogcategory/15/31/lang,az/
Previous Post