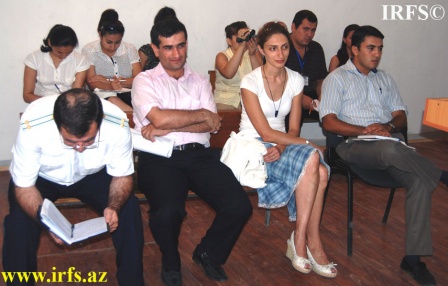 Today (28 August) in the Yasamal District Court, under the chairmanship of Judge Khagani Tagiyev, a hearing was conducted on "Azadlig" Newspaper correspondent Agil Khalil's lawsuit against the Chief Prosecutor, investigator Ali Guliyev, and the TV Channels AZTV, Lider, Space and ATV.
ATV, “Lider”, “Space” and Prosecutor’s representatives participated in the hearing. Khalil’s lawyer Elchin Sadigov spoke first and said that the appeal to TV channels regarding not introducing the footage about the journalist, which was broadcast on TV channels, remains unanswered. However, TV channels stated that they never received such an appeal.
The judge, ending these discussions, continued the hearing without viewing the footage broadcast on TV channels about Agil Khalil.
Sadigov assessed the video clip sent by the Prosecutor’s Office to the TV channels as interference in Khalil’s private life and insult to his honor and dignity. He called both this action and the broadcasting of this video clip by TV channels a violation of local and international legislation. “According to legislation, secretly recorded footage can only be shown in two cases, with personal approval and in the case of a court decision,” said Sadigov. “However in this case, neither a court decision nor Khalil’s approval was present.  On the contrary, Khalil declared that the statement shown in the footage was obtained from him through the use of force, and after a protocol about this was composed, this same video footage was sent to the TV channels and broadcast.”

But the TV channels’ representatives claimed they didn’t understand the content of the lawsuit and said that as the video clip was provided to them by the investigation, they broadcast it to inform society.

After the sides spoke, the judge left for brief deliberations. Upon returning, he announced that Khalil’s lawsuit would not be fulfilled.