AJU HELD EVENT REGARDING THE RESULT OF THE PROJECT 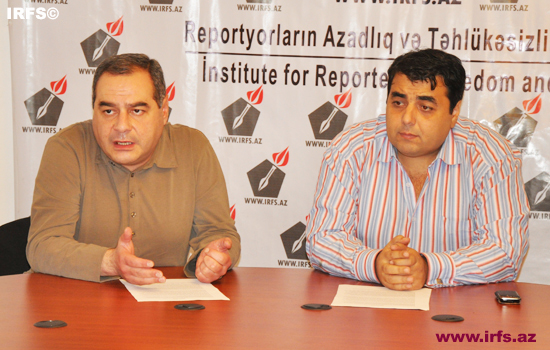 Today, 3 November, in the press center of Institute for Reporters’ Freedom and Safety (IRFS) a press conference was held regarding the result of the Azerbaijan Journalists Union’s project, “The legal enlightenment of the journalists in Southern Regions,” which was carried out with support from the State Support Council to NGOs.
The project’s coordinator Khagani Ibadov said that the purpose of the project is to increase local journalists ‘ legal knowledge who are working in

Southern regions and impress upon them the importance of journalist professionalism and responsibility.

Kh.Ibadov said that the Law Center of AJU in the Lenkeran region was created with this mandate and organized legal courses for journalists, and discussed freedom of speech and the laws that concern it.

The secretary of AJU, Shahin Babayev said in his speech that the amount of newspapers’ editions published in region’s press and the number of the people who read newspapers are very few, and suggested the interference of the state as a possible cause.