Another protest in support of arrested journalist Hilal Mammadov 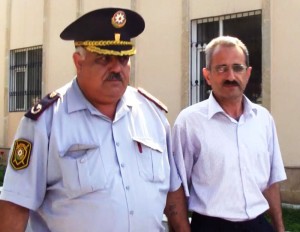 On March 13th the Baku Grave Crimes Court held a closed hearing on the case of Tolishy Sado newspaper chief editor Hilal Mammadov. Before the start of the hearing, the committee to protect the rights of Hilal Mammadov picketed outside the court. The action was attended by some 40 people, who demanded the journalist’s release, and was observed by representatives of the International Federation for Human Rights, which included employees of Russian NGO Memorial and Kyrgyz Center Citizens against Corruption.

“As Hilal Mammadov’s petition for re-questioning of witness Elman Guliyev was granted, the hearing was postponed” the journalist’s lawyer Ramiz Mammadov told the Institute for Reporters’ Freedom and Safety (IRFS).