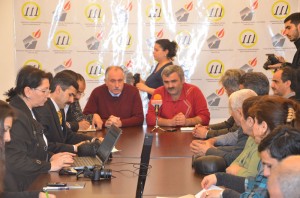 On 13 March the Committee to protect the rights of Khural newspaper chief editor Avaz Zeynalli held a press conference in IRFS press center in connection with the 9 year’s jail sentence handed to the journalist. Media representatives, who attended the event, said Avaz Zeynalli was arrested on political motives.“We declared from the very beginning that Zeynalli was arrested on political motives” said Afgan Mukhtarli, head of the Preventive Investigation Group set up in connection with the journalist’s arrest. “The verdict passed on the journalist yesterday proved our claims. The investigation, which lasted for one year, was accompanied by a great deal of legal violations. Face-to-face confrontation of Avaz Zeynalli and prosecution’s witnesses was not ensured. The court included all the accusations in the verdict, no matter these allegations were substantiated or not” added Mukhtarli.

Turan Information Agency director Mehman Aliyev also stated that the journalist’s arrest is politically motivated, regarding the 9 year jail sentence for the journalist as pressure on independent journalism in Azerbaijan.

“Sentencing the editor of an independent newspaper to such a lengthy prison term shows in such a poor condition Azerbaijan’s justice system is” ElshanHasanov, chairman of the Public Association Azerbaijan without Political Prisoners.

Ogtay Gulaliyev, coordinator of the Kur Civil Society, said it is necessary to immediately free journalists Avaz Zeynalli and Hilal Mammadov and other people arrested on political motives.

Idrak Abbasov, employee of Bizim Yol newspaper, regretted that political party leaders, NGO representatives, foreign embassies and international organizations, except for a few of them, did not react to the harsh sentence passed on the journalist.

According to commercial director of the Khural newspaper, Nizami Hasanli, they encountered so much injustice during the trial which lasted for 17 months. Hasanli said the court simply disregarded the evidence presented by the defense.

Verdict to be passed on Guba journalists

Another protest in support of arrested journalist Hilal Mammadov