ANOTHER ROUNDTABLE AS PART OF SING FOR DEMOCRACY CAMPAIGN 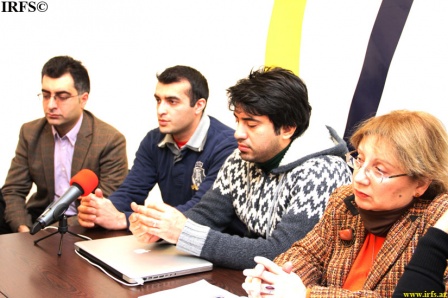 Another roundtable was held today as part of the Sing for Democracy campaign at the press center of the Institute for Reporters’ Freedom and Safety.
Leyla Yunus, the director of the Institute for Peace and Democracy, spoke about the smear campaign launched by the pro-govertnmental media around the Sing for Democracy campaign. She called on the government to free the 60 prisoners of conscience  and guarantee the property rights of the population. Yunus said that as part of the campaign. They have appealed to singers and human rights defenders from the participating countries. The appeal asks them to address a letter to President of Azerbaijan Ilham Aliyev, calling on him to take necessary measures for the release of prisoners of conscience and the development of democracy.

Journalist Shahvalad Chobanoglu reportded that the political prisoners are experiencing physical and psychological harrassment. He believes that Elnur Israfilov’s letter saying that he will join the ruling party and serve the President Ilham Aliyev was written under psychological pressure.

Turan Information Agency director Mehman Aliyev supported the Sing for Democracy campaign, describing it as a brave step and called on the government to fulfill the proposals voiced by the campaign.

Human Rights Club chairman Rasul Jafarov says if the government does not seem to be willing to address proposals voiced in the framework of the campaign, articles critical of Azerbaijan will continue to appear on international media, particularly the European media.

IRFS chairman Emin Huseynov believes that there has been considerable regression in the fields of freedom of speech and press in Azerbaijan since the launch of the Sing for Democracy Campaign. One journalist was murdered, and four have been jailed within this period. “Rafig Tagi was murdered, the editor-in-chief of islamazeri.com website Ramin Bayramov was arrested for drug possession and later arms possession. Xural newspaper regional correspondent Aydin Janiyev, who was supportive of our campaign, was arrested under hooliganism charges, Xural’s editor Avaz Zeynalli was arrested under an obscure charge and an Iranian TV channel’s reporter was arrested under a drug possession charge,” noted Huseynov and added that these persons must be freed and the European Broadcasting Union must show support.

Today the Supreme Court of Azerbaijan, under judge Ilham Jafarov, held a court proceeding on the appeal filed by IRFS correspondent to Nakhchivan Hekimeldostu Mehdiyev, against the Nakhchivan Supreme Court’s 10 November 2011 decision.  Mehdiyev, his lawyer Asabali Mustafayev, and public prosecutor Ehtiram Bakhshaliyev were in attendance.

During the proceeding, Asabali Mustafayev called NAR Supreme Court’s decision unfair, and claimed that the decision had been made without any investigation.  He requested the court to provide a fair decision.

Hekimeldostu Mehdiyev claimed that the charges brought against him are baseless, and said he hoped the Supreme Court in Baku would rule justly.

Following deliberation, the judge decided not to grant the appeal.

According to the criminal case launched against IRFS correspondent to Nakhchivan Hakimeldostu Mehdiyev under Article 189-1.1 of the Criminal Code (diverting electricity supplies), Sharur District Court demanded that he pay a 1000 AZN fine on September 22nd 2011.  NAR Supreme Court upheld this decision.