ANS EMPLOYEES ROUGHED UP BY POLICE 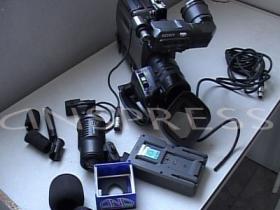 Yesterday, April 26, at approximately midnight, ANS TV employees from the program “Ich Khabar” were subjected to harassment by police. ANS TV employees Laman Ashrefgizi told this to the Institute for Reporters’ Freedom and Safety ANS TV yesterday at approximately midnight.
According to Ashrefgizi, ANS Employees; correspondent Njiat Suleymanov, operator Elmin Muradov and company cooperate supervision service employee Azer Balayev were filming the destruction of a mosque at the address 190 Murtuza Mukhtarov Street. N. Suleymanov approached Yasamal District Police Department Chief Mohubbet Huseynov to learn according to what decision the building was being destroyed. Huseynov refused to respond and ordered police in the area to confiscate the film equipment and cassettes in the reporting crew’s possession. Over 30 police used force to take the equipment and cassette from the journalists. During the clash, the ANS film crew’s equipment was broken. Police eventually returned the broken equipment to ANS, but not the video cassette.
IRFS spoke to Ehsan Zahidov of the Ministry of Interior’s press service. He said that he is aware of this incident and relevant departments in the Ministry of Interior are investigating.
Previous Post

LAWSUIT AGAINST “NOTA” NEWSPAPER NOT ACCEPTED FOR CONSIDERATION