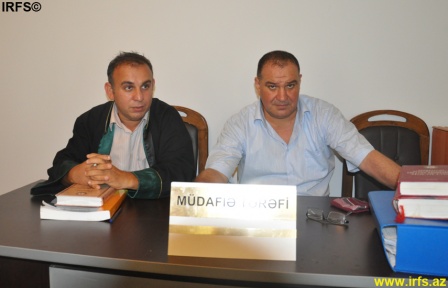 On November 27, the Baku Appeals Court under judge Amir Bayramov denied the appeal filed by human rights activist and prisoner of conscience Vidadi Isgandarli, as reported to the Institute for Reporters’ Freedom and Safety by Isgandarli’s lawyer Khalid Bagirov.

According to the lawyer, on September 12th the Garadagh District Court reduced Isgandarov’s sentence by dropping the assault and battery charges against him.

“Mr. Isgandarov’s jail sentence was reduced by 2 months. We sought to make it 4 months” said Bagirov.
Isgandarov was arrested during the April 17th 2011 protests organized by the opposition coalition Public Chamber. After the initial 15-day sentence issued by Nasimi District Court, his prison term was extended allegedly because there was an open criminal case against him.
Isgandarov was charged under Article 159.3 (impeding the exercise of the right to vote) and Article 160.1 (impeding voting commissions in their legal activities) of the Criminal Code.
Goychay Regional Court sentenced him to 3 years in jail on August 27th 2011. On November 2nd 2011 the Shaki Appeals Court upheld the decision.
On April 10th, 2012 the Supreme Court rejected a cassation appeal against the previous decisions.