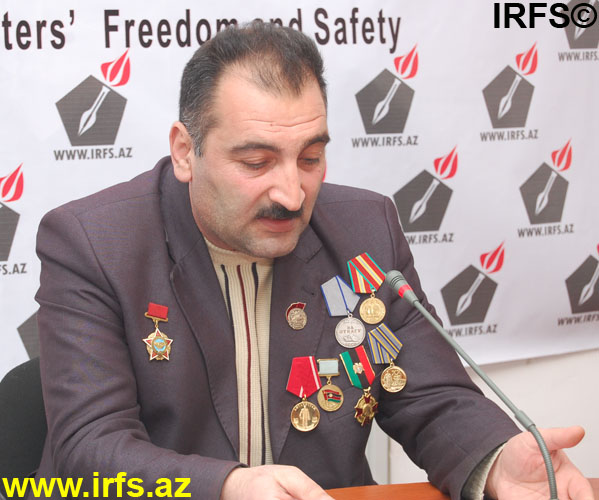 Today, in the press center of the Institute for Reporters' Freedom and Safety, a group of street newspaper salesmen conducted a press conference about obstacles in their work caused by the Sabail District Executive Administration.
One of the newspaper salesmen, Asif Asgarov, said that he and his colleagues have been selling newspapers and magazines in the area of Sabail region since 1995 and have paid all taxes and other obligatory duties as physical persons. Noting that Sahib Alasgarov began to suffocate press and to abolish newspaper sale places right after he was appointed the Head of Sabail District Executive Administration, Alasgarov said that he and his colleagues have been prevented from working for two months, resulting in financial losses. “I can say that as an individual owner, I have suffered 12,000 AZN in financial losses,” said Alasgarov.
Stating that each of his colleagues have also suffered between 12 000 – 15 000 AZN financial loss, Alasgarov added that they have appealed to the Chairman of the Press Council Aflatun Amashov, and on 20 July 2005 Aflatun Amashov appealed to the Head of Baku Executive Administration Hajibala Abutalibov in connection with this issue. According to an order of Abutalibov to Baku City Trade and Service Department Head Ramiz Hajiyev, the sales kiosks on Fountain Square and in Nizami Street were restored and registered legally.
A. Asgarov added that the Head of Sabail District Executive Administration said during his meeting with the owners that there have been dislocations but the spots have not been removed. However, under the name “dislocation” documents given to three vending stations have been annulled and those areas were given to other people.

In conclusion, Asgarov and the owners, whose rights were violated, stated that if Head of Sabail District Executive Administration S. Alakbarov does not end the artificial obstacles, they will conduct a protest in front of the presidential administration.