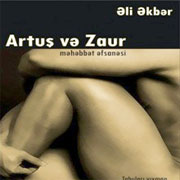 A ban has been imposed on the sale of writer Ali Akbar’s book “Artush and Zaur” in the “Ali and Nino” bookstore chain by the Sabail District Police Department. The Institute for Reporters’ Freedom and Safety was told this by Ali Akbar. According to Akbar, on 10 March the owner of “Ali and Nino” store chain Nigar Kocherli was called to the police department.
There she was told that Akbar’s book contains comment against the president and it should therefore be removed from sale.
On 11 March, the store was closed due to the controversy surrounding “Artush and Zaur.” A. Akbar told IRFS that the bookstores have restored their work today, 12 March; however, his book is no longer for sale.
The writer said that he would not do anything in connection with this issue.
To confirm the news IRFS contacted the owner of “Ali and Nino” store chain Nigar Kocherli. She did not want to speak to the press about it.
The Sabail District Police Department suggested that we should contact the Ministry of Interior. An unidentified representative there said that he did not have any information about this.
The book “Artush and Zaur” is about a love affair between an Azerbaijani boy and Armenian girl during the Karabakh war.
Previous Post