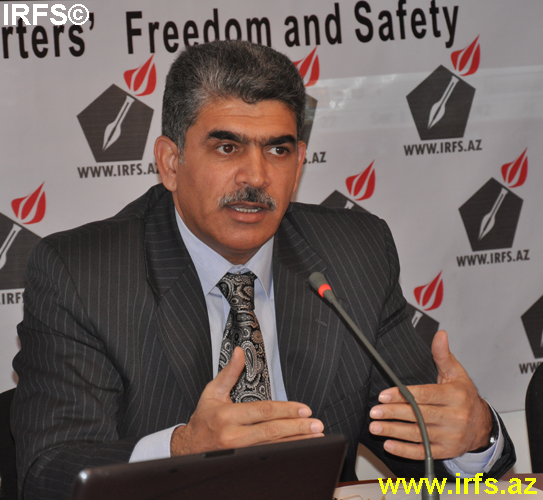 Today, 3 April, in the press center of the Institute for Reporters’ Freedom and Safety, the “Azerbaijan-Atlantic Collaboration Association” Public Union presented its report on “The Evaluation of the National Security’s Situation in the Azerbaijan Republic.”
Project analyst Sulhaddin Akbar opened the event. S. Akbar said that in this research project, which was prepared from 1 December 2008 and 1 April 2009, for the first time in Azerbaijan, an attempt has been made to systematically evaluate the situation of national security in the country on the basis of lining up primary national interests according to their level of thorough research, importance and acuteness in the context of domestic and foreign threat analysis.
In this research, in which the “Noxterleyn matrix” was used, outcomes and suggestions that will assist in fulfilling the national security priorities of Azerbaijan Republic have been reflected as well.
The main mission of the Atlantic Club is to organize intellectual support for the process of Azerbaijan Republic’s full integration into the Euro-Atlantic region, to form right public opinion about NATO in the society and to ensure close involvement of civil society in the integration process.