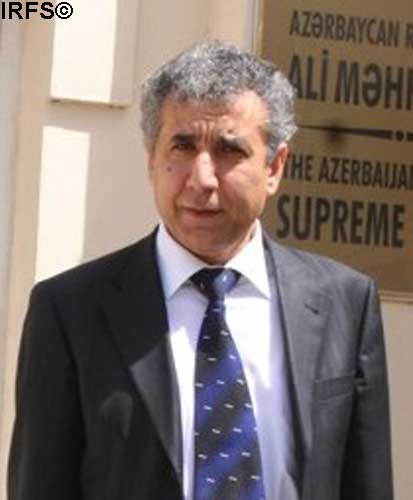 Shaki Appellate Court judge Gazanfar Karimov has filed lawsuit against “Legal Enlightenment Society” President Intigam Aliyev and lawyer Nurlana Aliyeva for insulting honor and dignity.
The Institute for Reporters’ Freedom and Safety was told this by “Legal Enlightenment Society” President Intigam Aliyev. According to him, the lawsuit stems from the publication of information about a decision adopted by the Legal Rights Council about Shaki Appellate Court Judge Gazanfar Karimov (for law violations during one of the hearings he chaired) in the “Judges’ Discipline Responsibilities” book published last year.
Noting that this information was taken from the website of Court Rights Council, Aliyev said that it is indicated in the decision that a dead person “was interrogated as a witness” during the process chaired by G. Karimov and the judge hired someone to write the decisions. However, the case opened against the judge was closed although there was substantial evidence.
“Information was later changed on the website and it was noted that Judge Karimov received a reprimand instead,” said I. Aliyev.
The Court Rights Council employee Huseyn Safarov told IRFS that information was placed on the website and no change was made to it afterwards. It was written “received a reprimand” not “case was closed,” added Safarov.
Judge Mehdiyev, emphasizing that the case was closed, claims that as a result of the publication of this information his honor and dignity have been damaged.
I. Aliyev said that the organization he directs work on human rights issues, and his activity and the complaints that he and his employees send to the European Court of Human Rights irritate authorities. Thus, they want to abolish his organization. “I believe the lawsuit of the judge is part of this campaign,” said I. Aliyev
IRFS tried to contact Gazanfar Karimov about this case but was unsuccessful.
Previous Post