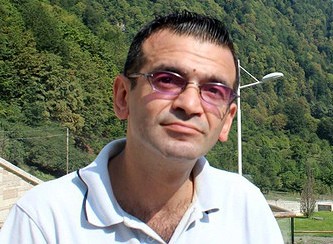 Arrested blogger Mehman Galandarov appears to have hanged himself in Baku Detention Centre #1, where he was held. The coordinator of ‘Azerbaijan Without Political Prisoners’ Public Alliance, human rights defender Ogtay Gulaliyev reported this on 29 April. He noted that there are murky circumstances surrounding Mehman Galandarov’s reported suicide in his detention cell on 28 April.

“Mehman Galandarov was noted for his critical stance and was engaged in blogging. He was one of the organisers and participants of the ‘We Do Not Want a King’ protest held in front of the Azerbaijan embassy in Tbilisi. The protest was a reaction to the amendments made to the Constitution last year. He also demanded freedom for the ‘prisoners of a statue’ Giyas and Bayram in front of Heydar Aliyev’s statue. He was framed and arrested on drug charges on 7 February, immediately after his return to Baku from Tbilisi. Mehman Galandarov is one of the victims of this regime,” Ogtay Gulaliyev said.

According to Ogtay Gulaliyev, Mehman Galandarov’s name has been included in the list of political prisoners by local human rights defenders and presented to the local and international community.

Mehman Galandarov was active on Facebook. On his personal account, he shared posts and cartoons critical of the authorities. On the day of his arrest, Mehman Galandarov called on everyone through his Facebook page to support Giyas Ibrahimov who has been sentenced to 10 years in jail on drug charges after writing a slogan on Heydar Aliyev’s statue: “Good morning, friends! Let all of us be Giyas! I will be him today. You should also be him in whatever way you can… Kisses for all. Lots of love. The struggle continues!” On that day, the blogger sent a message to one of his friends, which read ‘I am going to do an extreme thing; I will tear down Heydar’s statue downtown’.

After that, police officers came to Galandarov’s rented apartment and detained him. He was charged with drug trafficking (Article 234.2 of the Criminal Code), and Nasimi District Court ordered his pre-trial detention for 3 months.

Galandarov, a graduate from the psychology faculty of the Academy of Public Administration, has worked as a teacher in the College of Philosophy, Sociology and Political Science for more than 10 years.

Judicial Proceedings Continue on Blockage of Access to Websites