“AYAN” NEWSPAPER EDITOR-IN-CHIEF PLACED IN HOSPITAL AFTER BEING BEATEN 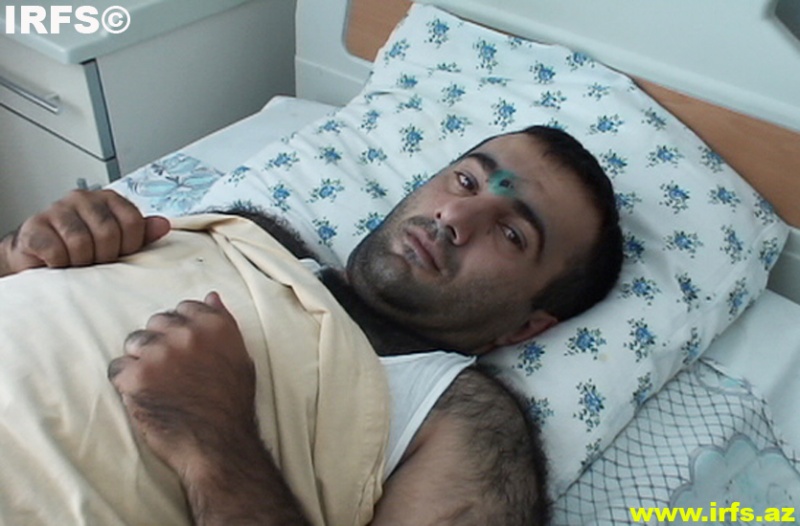 On 13 September, at around 2:30 a.m., “Ayan” Newspaper’s Founder and Editor-in-chief Javid Alasgaroglu (Shiraliyev) was beaten and sustained injuries. Alasgaroglu’s relatives called the Institute for Reporters’ Freedom and Safety’s hotline (055 816 40 04) at 3:22 a.m. and said that the editor-in-chief was placed in Semashko hospital’s reanimation department. He was unconscious when he was taken there.
IRFS employees went to the hospital immediately but were unable to receive information regarding Alasgaroglu’s situation. Neurosurgeon Fakhraddin Zeynalov, who received the patient, refused to give any information.
The editor-in-chief’s father Alasgar Shiraliyev told IRFS in the hospital that Javid Alasgaroglu left the house (Nasimi District, microregion 4, 28 Huseyn Seyidzade st.) at around 2:30 – 3:00 to smoke a cigarette. His brother left after him when he saw that his brother did not return back. The relatives, who found Alasgaroglu unconscious around his residence, brought him to the hospital. J.Alasgaroglu sustained injuries in the head, according to father Shiraliyev.
Although Alasgaroglu’s relatives told IRFS that they do not know who beat the editor-in-chief, they think his beating might be related to his journalism work.  According to the father, Alasgaroglu appealed to law-enforcement two weeks ago for being stalked. In addition, a lawsuit was filed against J.Alasgaroglu under article 147 (libel) of the Criminal Code. Agabey Agayev, the Director of “Vilash” water depot in Masalli region named after Heydar Aliyev, filed a civil lawsuit against “Ayan” newspaper, and demanded that the newspaper pay 50 000 (fifty thousand) AZN in fines and publish a refutation. Nasimi District Police Unit #19 employees came to the hospital in connection with the incident, took statements from the relatives of Alasgaroglu, and visited the place of the incident. IRFS employees went to the place of the incident to have a look as well; however, police did not provide any official information about the incident.
During the daytime hours the Nasimi District Police Department’s Police Unit #19 Duty department told IRFS that Alasgaroglu’s statement was already received. “In his statement the injured person stated that an unknown person subjected him to physical pressure while he was smoking a cigarette in the yard of his residence,” said the responsible person on duty, chief lieutenant Aliyev emphasizing that an investigation is being carried out into the incident.
At noon hours J.Alasgaroglu was transferred to a ward. There he told IRFS employees that he does not think this incident is a coincidence and believes that it is related to his professional work. “I left at 2:00 a.m. to smoke a cigarette as a habit before going to sleep when someone called me. It was dark. I thought he wanted to light his cigarette, but I saw three people when I approached him. One of them began to beat me,” said Alasgaroglu adding that they let him go when his neighbor’s car entered the yard of the building.