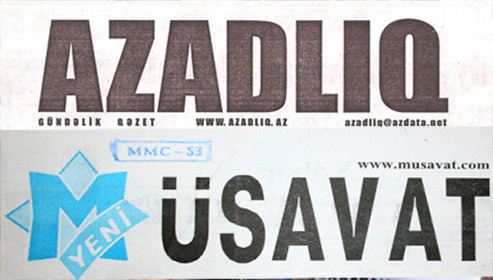 Tense relations between “Yeni Musavat” and “Azadlig” newspapers finally came to an end. The heads of both newspapers came to an agreement regarding this issue, according to the “Musavat.com” website.
“Yeni Musavat” Newspaper Editor-in-chief Rauf Arifoglu appealed to the imprisoned “Azadlig” Newspaper Editor-in-chief Ganimat Zahid regarding this conflict through an article titled, “We apologize if we hurt you.”
Ganimat Zahid left a reconciliation mission to Rauf Arifoglu in his letter, and called on him to solve the contradictions between the newspapers sitting at a tea table.
Yesterday, Rauf Arifoglu and “Azadlig” newspaper director Azer Ahmadov met and held a discussion regarding the existing situation. They made a decision that both newspapers should refuse to publish negative articles against each other and they should be loyal to the professionalism solidarity. The agreement applies to all types of articles.
Previous Post