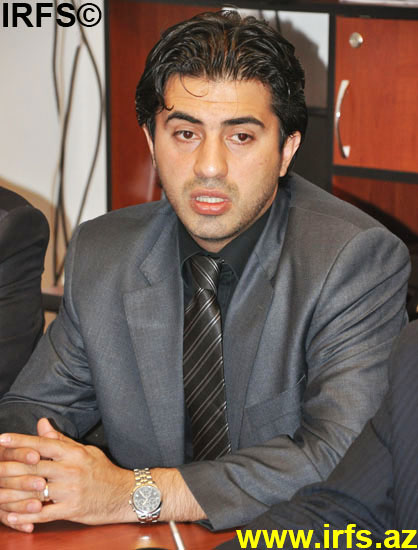 Today, 14 October, in the Baku Appellate Court, under the chairmanship of Judge Hilal Khalilov, a hearing was conducted on the appeal of the Institute for Reporters’ Freedom and Safety Chairman Emin Huseynov against the decision of the Nasimi District Court adopted on his lawsuit against the Ministry of Interior, the Nasimi District Police Department, and the Nasimi District Police DepartmentUnit #22 for subjection to pressure by police.
The Plaintiff’s representative, Media Rights Institute lawyer Elchin Sadigov, the lawyer of the Nasimi District Police Department, and the Nasimi District Police Department Unit #22 Mazahir Shahbarov participated on behalf of the defendant at the hearing. The motion of Elchin Sadigov to consider the case on the appeal through court investigation was not fulfilled.
The judge issued a decision to uphold the decision adopted by the Nasimi District Court, and not to fulfill the appeal.
On 17 June 2009 the Nasimi District Court issued a decision not to fulfill the lawsuit of Emin Huseynov to consider the police intervention into a peaceful event in "Alaturka" Restaurant on 14 June 2008, his detention in the police unit #22, his subjection to moral and physical pressure in the unit, and the failure to conduct an effective investigation into this case unfounded. In his lawsuit, Huseynov says that he was wrongfully detained by police, and subjected to physical and psychological pressure, as a result of which his health was damaged. He was seeking 50,000 AZN in compensation from each of the defendants.
On 14 June 2008, a group of fans of Cuban revolutionary Ernesto Che Guevera was trying to conduct an event in "Alaturka" Restaurant when the employees of law enforcement organs interfered. IRFS Chairman Emin Huseynov, who was there observing and filming the event, was beaten by police in the Police Department 22. He lost consciousness due to police pressure and received treatment for more than twenty days in the hospital. He is still continuing his treatment.
Previous Post