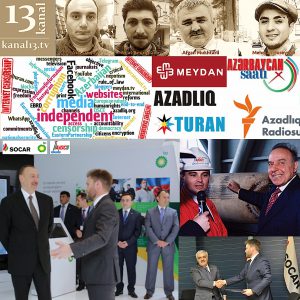 The Institute for Reporters’ Freedom of Safety (IRFS) condemns the authorities of Azerbaijan for new wave of attacks on the freedom of expression in the country manifesting in the form of prosecution of the leadership of independent internet television station Kanal 13; use of brutal torture against arrested journalist Nijat Amiraslanov, bolstering of the defamatory legislation and finally, the abominable cross-border abduction of journalist Afgan Mukhtarli from Georgia.

Late last week, Head of Kanal 13 Aziz Orujov, who had already been under administrative arrest for a month on baseless charges of disobeying the police, faced new fake criminal accusations of illegal entrepreneurship and abuse of official powers, instead of being released after his term was up. The accusations against Orujov have been brought as part of a unified criminal case initiated against civil society groups by the Prosecutor General’s Office of Azerbaijan in April 2014, as a result of which, human rights defenders and journalists such as Leyla Yunus, Intigam Aliyev, Rasul Jafarov and Khadija Ismayilova were arrested and convicted, and virtually all independent NGOs were paralysed.

Also last week, journalist Nijat Amiraslanov, who was arrested in the Gazakh region, was, under the influence of torture, forced to abandon his appeal against his 30-day administrative arrest for allegedly disobeying the police. Visiting the journalist in the courtroom, his colleagues and lawyer found out that his front teeth had been knocked out, but in response to his colleagues’ question as what had happened to him, the journalist was intimidated into answering that his teeth had fallen out on their own.

Additionally, at the end of last week, the authorities toughened the punishment under the defamation article on insulting the honour and dignity of the president, increasing the term of a prison sentence to five years and also significantly increasing the cost of monetary penalties.

The audacious and illegal abduction of journalist Afgan Mukhtarli from Georgia and the new threats made by the Prosecutor General of Azerbaijan shows that the authorities have gone beyond the borders of Azerbaijan in terms of repression of their critics, going as far as to violate the sovereignty of the neighboring state of Georgia, where many Azerbaijani journalists and human rights defenders are forced to continue to work in political exile.

“The strengthened crackdown on freedom of speech is also associated with the intensification of nepotism and corruption of the ruling family of Azerbaijan,” said IRFS CEO Emin Huseynov. “It was immediately after President Ilham Aliyev’s appointment of his wife Mehriban Aliyeva as the first vice-president of Azerbaijan that the authorities launched a large-scale repression against critics.

“The events, that followed her appointment were, the arrest of well-known journalist and human rights defender Mehman Huseynov, the withdrawal of Azerbaijan from the Extractive Industries Transparency Initiative (EITI), the death of blogger Mehman Galandarov in jail under unclear circumstances, and the commencement of judicial blocking of independent online media. All these actions demonstrate the great lengths that the authorities will go to to avoid being held accountable.” Huseynov said.

Given the Azerbaijani government’s deliberate exit from the EITI followed by the new wave of repressions against human rights, the Western oil companies including BP should, take into account their responsibility for human rights and transparency, refrain from signing a new oil and gas contract scheduled for late June, which envisages the development of subsurface resources until 2050, with the State Oil Company of the Azerbaijan Republic (SOCAR).

Taking into account the critical situation that has emerged due to of the Azerbaijani authorities, IRFS also calls on the European Union and the United States to suspend all programs for cooperation with the Azerbaijani authorities and instead allocate these funds to ensure the survival and development of independent civil society, which is on the verge of total destruction.

IRFS strongly recommends that Secretary General of the Council of Europe, Thorbjorn Jagland suspend joint implementation with the government of Azerbaijan of the Action Plan for Azerbaijan and also to start considering the possibility of applying disciplinary procedures all the way up to the country’s exclusion from the Council of Europe.

IRFS similarly recommends that the European Union suspend negotiations with the government of Azerbaijan on the Comprehensive Agreement.

IRFS calls on international financial institutions such as the World Bank, International Monetary Fund, European Investment Bank, European Bank for Reconstruction and Development, and the Asian Development Bank to suspend allocation of funds for implementation of projects in Azerbaijan unless radical reforms are carried out with increased accountability and liberalisation of the legislative framework that promotes respect for human rights.

IRFS also calls on the European Union and the United States to start the procedure of imposing sanctions on the first family of Azerbaijan and their friends directly or indirectly involved in systematic and gross violations of human rights in Azerbaijan.

IRFS asks the OSCE, Council of Europe, European Union and the UN to seriously revise the mechanisms of cooperation with the Azerbaijani authorities, giving them a clear understanding of the need to comply with international obligations.

IRFS calls on the Azerbaijani authorities to abandon repressions against civil society and opposition, release all political prisoners and start genuine reforms to ensure respect for human rights and democracy, to increase accountability and transparency and to ensure justice and the rule of law in the country.