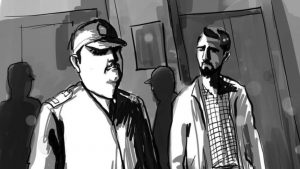 Baku Court of Appeal has reviewed the appeal filed by prisoner of conscience Giyas Ibrahimov. Having been brought to the courtroom, Ibrahimov was placed inside the enclosed glass dock.

The hearing was presided over by Judge Vugar Mammadov. Lawyer Elchin Sadigov made a speech at the court session. He stressed that the drug charges against Ibrahimov were trumped-up. The lawyer solicited the court to drop the case on exculpatory grounds.

Giyas Ibrahimov took the floor next. “I have been in jail for one year now. I have heard many fairy tales during this period. Now, I want to retell one fairy tale for you. Once upon a time, there was a king who was a falsifier…” At that, the judge turned off Ibrahimov’s microphone and asked him to speak on merits. Giyas expressed his objection by dropping the microphone on the floor. A convoy guard entered the cage and put handcuffs on Ibrahimov. Ibrahimov’s hand was injured in the process.
After that, the prosecutor made a speech and sought rejection of the appeal. The court went to the deliberation room and upon return, announced that the appeal was not granted.

Giyas Ibrahimov was arrested on drug charges after writing “Happy Slave Holiday” on the pedestal of former president Heydar Aliyev’s statue.
He was sentenced to 10 years in prison by the verdict of Baku Grave Crimes Court.