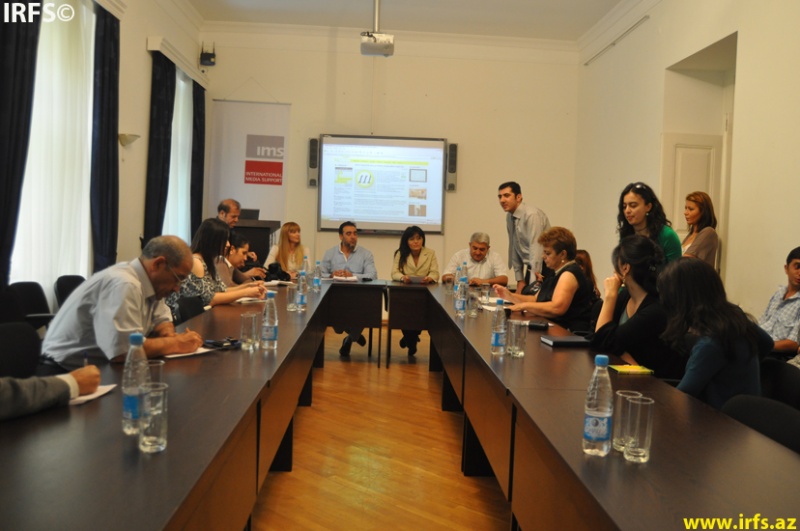 The winners of a contest organized by the Azerbaijani Media Center were announced on September 15th. The competition took place on 22 July, the Day of National Press.
Media Center project manager Seymur Kazimov said that the winning journalists will visit local journalists in Stockholm to watch how they cover the aftermath of the parliamentary elections, which will be held in Sweden this September. The journalists were chosen in a contest.
“Twenty two journalists submitted investigative articles to the contest that lasted 53 days. Two articles were rejected, because of late submissions. In total, seven journalists were chosen to visit Sweden,” said Seymur Kazimov.
The head of the Media Center Gulnara Akhundova noted that the project was financed by the Danish Foreign Ministry, which granted 22,000 EUR for the implementation of the project. She said that Azerbaijani journalists will visit Sweden for the project.
Members of the jury Hafiz Hasanov, Rovshan Bagirov and Ilhamiyya Rza discussed the articles submitted to the contest. At the end, Ilhamiyya Rza announced the winners. The winners were independent journalist Farah Sabirgizi, spokesman for the Strategic Research Center under the President of Azerbaijani Republic Anar Huseynov, Var.az website employee Samira Hasanli,  Azerbaydjanskie İzvestiya newspaper employee Leyla Amirova, RIA-Novosti correspondent Kamal Ali, Azadlig correspondent Ayten Mammadova, as well as Ayna newspaper employee Idrak Abbasov and the Institute for Reporters’ Freedom and Safety, editor of online Objective TV.