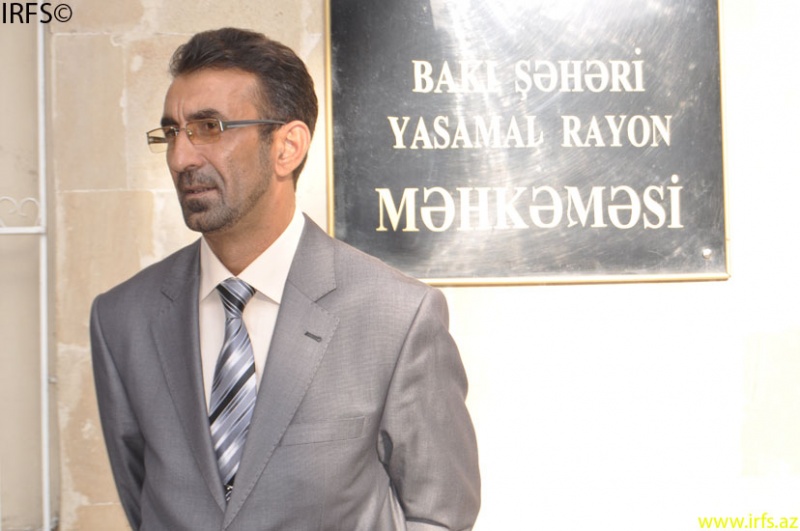 Today, 15 September, in the Yasamal District Court, under the chairmanship of Judge Khagani Tagiyev, a hearing was held on the lawsuit filed by Ganimat Zahid for early release.
Ganimat Zahid`s lawyer, Elchin Sadigov, did not participate as he was not in the country. The Judge offered to postpone the hearing with a refusal from the lawyer. Ganimat Zahid wrote a statement of refusal from the lawyer.
Ganimat Zahid said in his speech that he was imprisoned for two years and six months and was pardoned by a presidential decree. That is why, he requested that the judge to drop the imprisonment verdict and fulfill his statement.
State plaintiff Sahin Ismayilov said that Ganimat Zahid was not reformed enough. According to the law, three years should pass. If there is evidence that affirms reform took place, then Ganimat Zahid`s imprisonment can be reduced. The prosecutor said that there is no such proof in the case materials and he requested to reject the lawsuit.

Then, the judge went to consider the case. The decision will be announced on 16 September at 10:00 a.m.

Ganimat Zahid was convicted under articles 127.2.3 (hooliganism with intentional infliction of minor bodily harm) and 221 (hooliganism) of the Criminal Code and imprisoned for four years.On 17 March, he was pardoned under a pardon decree signed by Azerbaijan Republic President Ilham Aliyev
Azadlig newspaper has been published since 1989 and operates as daily newspaper.