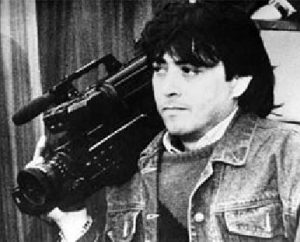 Azerbaijanis are marking 21 years  since the death of well-known Azerbaijani TV-reporter and national hero Chingiz Mustafayev. Along with his operative on-the-scene reporting on the war between Azerbaijan and Armenia over disputed Nagorno-Karabakh region, Mustafayev is also the author of the footages showing the scene of carnage and corpses of ethnic Azerbaijanis massacred by Armenian military in the town of Khojali on February 26, 1992.

Mustafayev died of a shell-splinter injury on June 15, 1992, while he was filming another skirmish in Nakhchivanik village of Agdam region. He did not turn off his camera even when he was taking his last breath.

The brave journalist was given the honorary title of Azerbaijan’s National Hero after his death, in 1993.

Note that there is a radio station and fund named after Chingiz Mustafayev in Azerbaijan.