Journalist prevented from doing his job 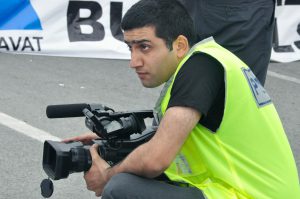 On February 4th security police prevented Obyektiv TV employee Javid Gurbanov from performing his professional duties in front of the Department for Investigation of Grave Crimes under the Prosecutor General’s Office. Security police officers grabbed Gurbanov’s camera and took him to the police office while he was filming REAL Civil Movement head Ilgar Mammadov and Musavat Party deputy chairman Tofig Yagublu, both invited for interrogation in connection with January 23 and 24 protest in Ismayilli.

Note that there is no provision in the national legislation prohibiting the filming of government agency building. Meantime, the press secretary of the General Prosecutor’s Office, Eldar Sultanov, told the IRFS that there is no need to get permission for filming the façade of the building and therefore it is illegal to detain the journalist for this.

The case of Javid Gurbanov is just one from many others in which journalists had been searched, delayed, obstructed or put under routine surveillance.

Statement: Internet Freedom Put in a Stranglehold in Azerbaijan