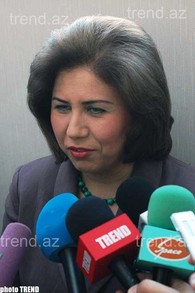 During today’s (10 February) session of the Milli Mejlis, Vice-Speaker Bahar Muradova expressed opinion in connection with proposals of the parliamentarians that object to Azerbaijan's National Television and Radio Council’s decision to translate Turkish soap operas into Azeri. She said that the application of any law should not be considered as suppression of any language.
“The government language of Azerbaijan is shown precisely in the Constitution. We can master and speak other languages,” said Muradova. “However, this should not be realized on the expense of suppressing our government language. We may have related languages, but every nation has its own government language. Measures taken in connection with the application of government language should not be received with hostility.
According to “Mediaforum” news site, B. Muradova touched on the issue of foreign radio stations that have banned from FM radio waves.
“We need to end this issue,” said Muradova. “The President expressed his position, and according to this position, we have not ceased the work of the radios, but recommended that the requirements of the legislation be fulfilled. I think that the decision to discontinue the radios’ broadcasting via national frequencies is right and no one has the right to blame Azerbaijan’s incumbent government and the leadership of Azerbaijan's National Television and Radio Council.”
Note that the FM broadcasts of "Radio Liberty,” "Voice of America" and BBC in Azerbaijan were ceased on 1 January 2009 on the basis of a decision that Azerbaijan's National Television and Radio Council issued on 30 December 2008.
Previous Post