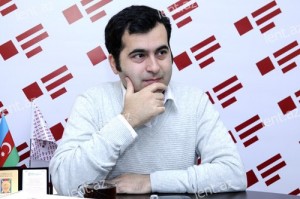 Today youth activist Bakhtiyar Hajiyev was  detained and taken to Narimanov District Police Office #18, as he wrote in his Facebook status update. The reason for detention was Bakhtiyar’s filming a police officer engaged in beating a citizen. Hajiyev has been released following clarification at the police office.

In a phone interview, Hajiyev told IRFS that he was detained without any reason while filming the fact of violence with his camera.

“I saw a policeman using violence against a citizen near Narimanov subway station and tried to film what was happening. Seeing this, the policeman came up and said that I had to go to the police office with him. At the office, I met the police chief and we cleared up the issue. While there, the police officers who were speaking and acting rudely while detaining me, apologized at the request of the chief. Then I was released” said Hajiyev.

At the time of Hajiyev’s detention, the Police Office #18 denied the fact to IRFS, but after persistent calls, said that Bakhtiyar Hajiyev was released.