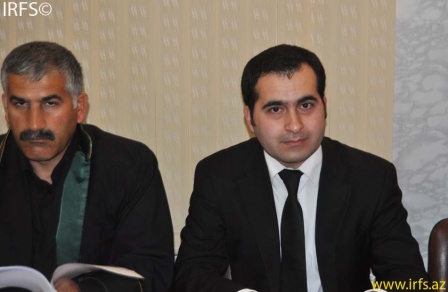 Today, (6 December) the Supreme Court held a hearing on the cassation appeal filed by Bakhtiyar Hajiyev against 6 July, 2011 judgment of Ganja Appeals Court. Judge Imran Hajigayibov presided over the hearing and denied Hajiyev’s appeal.
Hajiyev`s lawyer Sadig Bagirov and public prosecutor Mahir Abbasov attended the hearing, but plaintiff Hajiyev was not allowed to attend. His lawyer, S. Bagirov, asked the court to allow the youth activist to attend the hearing, but Judge I. Hajigayibov said that B. Hajiyev had received a notification, but never specified that he intended to attend the court hearing.
The hearing started with Bagirov filing a motion requesting the court to appeal to the Constitutional Court on the constitutionality of the law on military service. He then filed another motion requesting the court to annul the activist’s pre-trial detention and to submit copies of protocols of the Court of First Instance and the Appeals Court to defendant’s side.
Public prosecutor M. Abbasov said the appeals of the defendant are unfounded and demanded the court to uphold decision of Ganja Appeals court.
The criminal case against Bakhtiyar Hajiyev was launched at the end of January 2011, at which point he signed a statement of commitment not to leave Ganja. At the end of February, his pre-trial detention was replaced with release under police bail.
Ganja City Court sentenced youth activist Bakhtiyar Hajiyev to 2 years in jail on May 18, 2011, charging him with evasion of military service. It is widely thought that Hajiyev was arrested for his activity on social networking sites and his support of the March 11th Great People’s Day campaign.