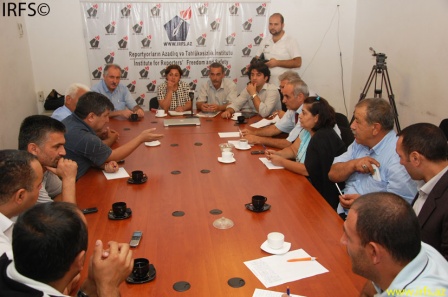 At a press conference today, the Head of the Resource Centre for Democracy and Human Rights in Nakhchivan Malahat Nasibova spoke about the appalling human rights situation and the hostile working conditions for journalists in Nakhchivan.
“Repressive methods are tested in Nakhchivan, and then applied throughout Azerbaijan. For example, it was in Nakhchivan that people were first placed in psychiatric hospitals when they were caught protesting; and it was in Nakhchivan where the first kidnappings of journalists took place,” she said.
This time, a man has been killed in the Ministry of National Security for the first time. His name was Turac Zeynalov. Nasibov called the case a sickening abuse of human rights, and proposed the creation of a group of human rights defenders to monitor the situation in Nakhchivan.
"We need to publicize Zeynalov’s murder, and the cases of the four Nakhchivan airport staff who are still in detention and were also tortured. All of them, including Zeynalov, were arrested without following legal protocol."
"It is impossible to get any comments or information from the state agencies in Nakhchivan. Staff at all levels abuse journalists, and refuse to answer questions,” said Nasibova.
Those in attendance, including the members of the Editors’ Union, strongly condemned the actions of the National Security Ministry of Nakhchivan.
They called on the authorities of Nakhchivan to respect the law and respect human rights.
The Editors’ Union has decided to form a group of journalists and human rights defenders, which will go to Nakhchivan to conduct research on the ground.
Previous Post