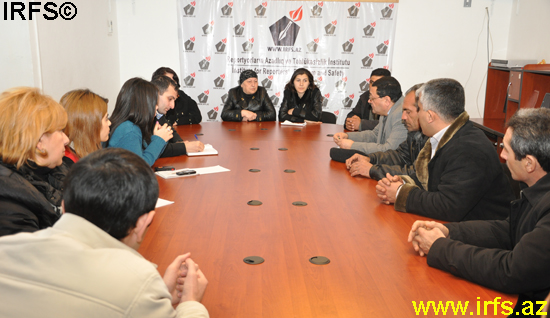 Today, 19 January, in the press center of the Institute for Reporters` Freedom and Safety, a group of residents from Bayil settlement, Gulbala Aliyev Street conducted a press conference regarding the adopting of the court decision to tear down their houses.
According to Sevinc Parvana, who spoke on behalf of the residents, several days ago the residents were given an invitation by the Sabail District Municipality to pay land duty. Then the residents implemented the demands of the invitation. 10 days later they received an invitation to court from the Sabail District Court.
“On 30 September 2009, a decision was issued alleging that the land given to the residents by municipality and the houses were built illegally,” said S.Parvana.  “Although we appealed to the Supreme Court, we did not receive a positive response. Therefore we will appeal to the President.”
Previous Post