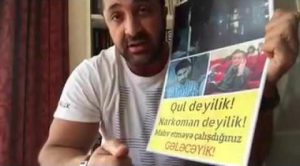 Two relatives of blogger Ordukhan Teymurkhan, whose family members are persecuted for his political speeches, have been sentenced to 30-day administrative imprisonment on charges of resisting the police, human rights defender Ogtay Gulaliyev reports.

Even 2-year-old fever-stricken Seljan was also taken to the police office and was kept there on the pretext of a ‘conversation with the chief’. Twelve relatives of the blogger were held in police custody overnight. They were not given a place to sleep, water or bread. Ordukhan’s relatives were demanded to get the blogger to stop his critical speeches.

The blogger’s relatives except for his elder brother Khanlar Dadashov and nephew Sabuhi Zeynalov were released on 19 February. Dadashov and Zeynalov were sentenced to 30-day administrative arrest on charges of resisting the police.

Khanlar Dadashov is 64 years old and suffers from diabetes. He works for First Aid Service. Sabuhi Zeynalov was not at home at the time of the incident. He went to the police office after being told that his mother had been taken there, and was accused of resisting the police. He had his wedding day scheduled for 12 March.

Background: Blogger Ordukhan Teymurkhan lives in Netherlands in exile. He makes critical speeches against the government of Azerbaijan. Recently, his close relatives publicly disowned him. But even after this, the pressures of the family have not stopped.