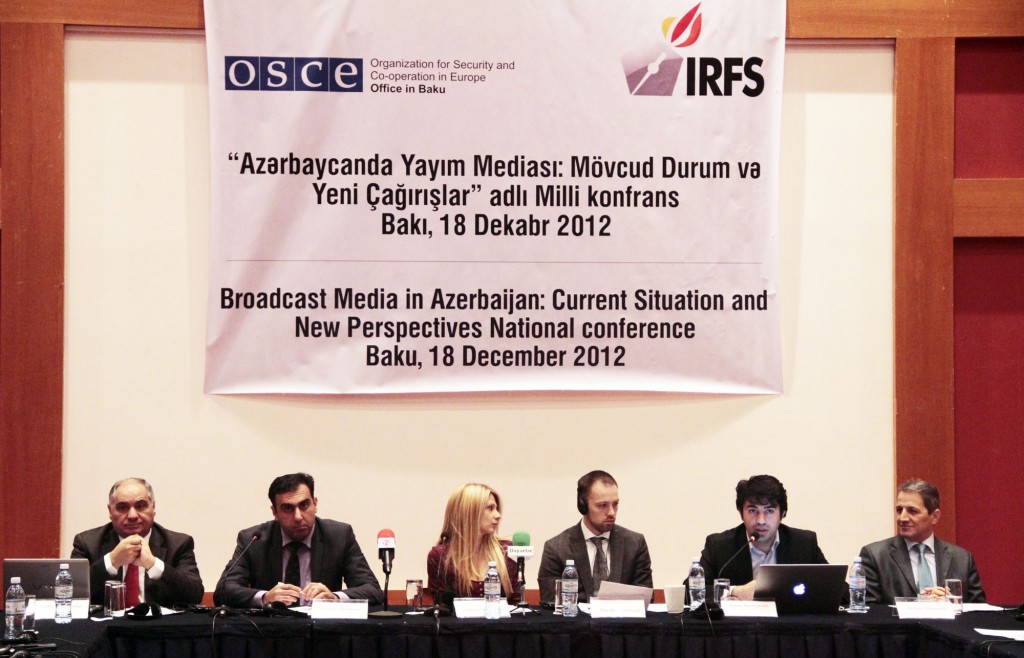 Azerbaijani government should ensure political debates on national broadcast instead of investing tax payers’ money into soap operas, said the organizers of the Broadcast Media conference that took place on December 18 inBaku.

The conference is part of a larger initiative, implemented by Institute for Reporters’ Freedom and Safety (IRFS) and supported by the OSCE Office inBaku–Change in the air: Advancing the debate on broadcast pluralism and diversity inAzerbaijan.

In his opening speech, Head of Democratization Unit at the OSCE Office inBaku, Nicolas Detch said this kind of events could help improve independent broadcasting in the country. He noted that pluralism in media is necessary if the purpose is to ensure democratic presidential elections in 2013.

ICT Ministry representative Gulam Abdullayev informed the participants of the work implemented by the government in the sphere of transition to digital broadcasting. Discussions are underway on the transition to DVBT-2 and a national satellite is going to be released in the near future.

IRFS chairman EminHuseynov welcomed government’s consideration of a proposal from civil society to use DVBT-2 standards during transition to digital broadcasting. Huseynov recommended that government would buy and install up-to-date transmitters and receivers to ensure high-quality digital broadcasting. According to Huseynov, currently the state-owned Radio and Television Production Association has amonopoly over digital transmission of all national television channels. The greater independence of the broadcasters could be achieved if each broadcast channel had its own digital TV transmitters. TV and radio transmission must be privatized, noted Huseynov.

In addition, the conference discussed professional and legal obligations of broadcast media. The famous TV host, professor Gulu Maharramli said that the law and professional ethics require media to ensure objectivity, pluralism, and to take into account the public interest. However TV channels fail to ensure these standards because of state control and lack of public censure.

IREX lawyer Alasgar Mammadli called for liquidation of the state-run television AzTV. He noted that for 11 years Azerbaijani government failed to fulfill its commitment before the Council of Europe to privatize this channel; instead it opened another two state channels, Sports TV and Culture TV. Referring to the Lithuanian practice, Mammadli proposed to issue permanent licenses to channels in order to increase their attractiveness as business areas, and reduce the influence of the state.

The second panel was moderated by IREX Chief of Party for New Media Project, Angela Nicoara.

Among all national TV channels, only public television Ictimai TV was represented at the conference. Ictimai TV representatives, Head of Public relations department Tahir Mammadov and Head of News and Analytical Programs Department Anar Yusifoghlu both believe that the Ichtimai TV channel serves the interests of society. Mammadov acknowledged that Ictimai TV avoids politicization or politicized programs. According to him, Ichtimai TV does provide diverse coverage on current affairs, including activity of the opposition..

However media monitoring conducted by IRFS showed that Ictimai TV failed to guarantee pluralism and serve the public interest. The monitoring results, presented by Rashad Aliyev, testify for the lack of pluralism on Ichtimai TV as it did not provide platform to the opposition but supports the government agenda. “The scandalous video of a bribe deal between former university rector Elshad Abdullayev and former MP Gular Ahmadova, which was a subject of wide speculation, went unnoticed on this TV,” said Aliyev.

Monitoring covered six TV channels (including ANS, AzTV, ATV, Ictimai TV, Lider TV and Space TV), one radio (Ictimai Radio) and one state news agency (AzerTAc). Some elements of pluralism were observed on ANS and Ictimai TV. And the rest of TV channels have been engaged in active propaganda of President Ilham Aliyev.

Summing up, IRFS Chairman Emin Huseynov noted that the government must stop controlling all types of media that play an undeniable role in democratization of the society.

The Right to Remain Silent